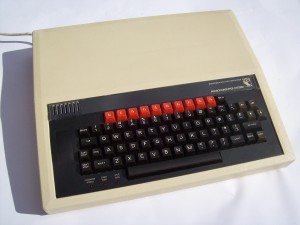 er was released to us in the UK in the late 1981. During is lifespan it was given the nick-name the ‘Beeb’ which was used mainly by its uses but it was easily recognizable by its small ‘Owl’ logo.

The Acorn Proton was a pre-existing project at Acorn to succeed the Atom home computer.  It was then submitted for, and won, the Literacy Project tender for a computer to accompany the TV programs and literature.  Renamed the BBC Micro, the platform was chosen by most schools and became a cornerstone of computing in British education in the 1980s, changing Acorn’s fortunes. It was also moderately successful as a home computer in the United Kingdom despite its high cost.  The machine was directly involved in the development of the ARM architecture which sees widespread use in embedded systems as of 2009. 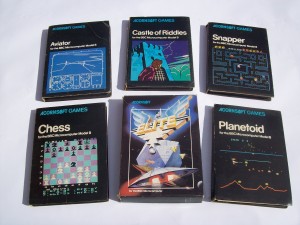 mputer – the vast majority of UK schools used BBC Micros to teach computer literacy and information technology skills.  I can remember using these machines at school in my class ‘computer studies’ creating short programs as the basic was quite easy to use.  I wonder if anyone remembers  the BBC’s version of  Ceefax/Teletext that was called Prestel lol.

As a games machine i think the BBC will always be remembered for its great titles such as Repton, Revs, Frak and Elite.  I Personally liked the docking sequence on Elite when the automatic docking computer was initiated. This procedure puts your ship in auto-pilot and allows you to dock  safely inside a small sort of rectangular shaped docking station that was on a side of a large planet. (which is a bit like the Death Star on Star Wars i suppose).

(on the C64 version, when the automatic docking sequence is engaged, the game featured the music ‘The Blue Danube’ which was composed by the Austrian composer Johann Strauss II, in 1866 and i though this was an excellent marriage.  The Blue Danube was later to become the theme tune for the most excellent game Manic Miner.)

There were five developments of the main BBC micro circuit board that addressed various issues through the models production, from ‘Issue 1’ through to ‘Issue 7’ with variants 5 and 6 not being released. The details of the technical changes were documented in the 1985 ‘BBC Microcomputer Service Manual’ from Acorn.

Acorn also introduced the Model B+ in mid 1985, were the RAM was increased to a total of 64 KB and also included a floppy disk support as standard, due to these changes this had a modest market impact.  The extra RAM in the model B+ BBC Micro was assigned as two blocks, a block of 20 KB dedicated solely for screen display (so-called “Shadow” RAM) and a block of 12 KB of ‘special’ Sideways RAM.  The B+128 came with an additional 64 KB ( 4 × 16 KB “Sideways” RAM banks) to give a total RAM of 128 KB.

The Model A (16KB Ram) and the Model B (32KB Ram) were initially priced at £235 and £335 respectively, but rising almost immediately to £299 and £399 due to increased costs.  Acorn anticipated the total sales to be around 12,000 units, but eventually more than 1.5 million BBC Micros were sold.

In 1983, due to the high cost of the BBC Models and with major competitors such as the Commodore 64 and the ZX Spectrum manufacturing their machines much cheaper, Acorn attempted strike back by producing a largely compatible but cut-down version intended for game playing, hence the 32K Acorn Electron was born.  Games written specially for the Electron usually run on the Model B although the Electron was not completely backward compatible.

1986 saw Acorn following up with the BBC Master to complete to range, this offered memory sizes from 128 KB and many other refinements which improved on the 1981 original.  At heart it was essentially the same 6502-based BBC architecture, with many of the upgrades that the original design had intentionally made possible (extra ROM software, extra paged RAM, second processors) now included on the circuit board as internal plug-in modules.

Jodrell Bank was reported to still be using a BBC Micro to steer its 42ft radio Telescope in 2004.

The BBC Micro also featured in the retro game show ‘The Adventure Game’ the programe that was often considered to have been a forerunner of ‘The Crystal Maze’. The BBC was use in a section of the adventure game were the players of the show had to guide a character through a maze and find a crystal without being kill by a dragon.

The Drogna Game, which also came in the middle of the program, gave the contestants another opportunity to regain a crystal.  The game is played by two players: one would be a contestant and the other would be a creature known as the Red Salamander of Zardil.  This game became so popular that Acornsoft released a version for the BBC Micro home computer.