The Atari 2600 is probably the best known games console of all time.  Over it’s life span it had several different names such as ‘The Woody’, the VCS – (Video Computer System), the CX-2600, CX-2600A and most famous of all “The Heavy Sixer”.

My earliest recollection of the Atari 2600 was back in the late 1970s, getting on a bus from school into my local town and going straight to Woolworths.  There they had a 2600 in a glass case were myself and schoolmates played games like  Space Invaders, Pacman and Breakout when they just being released in October for the Christmas sales.

The first version to appear was the Heavy Si

xer which was released in October 1977.  There are many that say it was called this because of its heavier internal shielding but this is incorrect, it was heavy purely because of its thicker moulded casing.  These units were made by Cherry Leisure in Sunnyvale, US and this is noticeable with the Cherry Leisure label on the power supply.

There are also subtle differences with the joysticks compared to standard, mass produced joysticks but you do have to know what your looking for to find them.  The casing  is moulded slightly different so accept the rubber surround on the top of the handle.  On mass produced sticks, on the edge of the rubber gator the rubber edge tucks under a plastic ridge whereas on an original heavy sixer stick the gator has lugs that tucks into slits on the joystick surround to secure the rubber handle section.

Another quite important difference is that the internals are built to a much higher standard (e.g. an original sixer red button has a quality feel about it, depresses further and has a proper switch underneath so it clicks when pressed whereas mass produced stick feel vague, cheap and hardly move when pressed).  The easiest ways i find to distinguish them is that he retaining screws on the bottom of the joystick are recessed on mass produced sticks and the screws are quite flush on Heavy Sixer Joysticks.

Here are some of the games that made the Atari 2600 what it is today.

The original box to come with the Heavy-Sixer is also well known for it’s picture of a chess piece.  This can be seen as the fifth picture in from the top right hand corner of the box.  Although there were other pictures on the box representing various games, the chess piece is famously remembered due to a gentleman in Florida suing Atari for displaying the picture on the box and without Atari actually producing a chess game available to play.

The reason for this is because the 2600 was only capable of producing three sprites or eight with some clever programming.  This problem was later overcome when a programmer known as Bob Whitehead developed a technique known as Venetian blinds, this allows for eight or more sprites in a row where the position of each sprite changes every scan line.  However before this technique was introduced the chess symbol was removed and replaced with a different picture, needless to say these boxes are quite sort after and rare.

Only 250,000 of these were manufactured before production was moved to Hong Kong,  this was where it was more viable to mass produce the Atari 2600 at low cost using thinner cases and internals.

e 800,000 systems produced were sold, this lead to the founder of Atari inc, Nolan Bushnell leaving the company and taking quite a diverse career change setting up a Pizza Time Theater, later to be known as ‘Chuck E. Cheese!’ which became quite successful. (probably a lot less stress as well).

In 1979 the 2600 became the best selling Christmas present up to date selling over 1,000,000 units, and over 2,000,000 in 1980 although Atari was to getting firm competition from other companies such as Mattel’s Intellivision and the Videopac by Philips

From 1980 onwards the Atari 2600 was to be revised nearly every other year to keep the system looking new starting with the removal of the two difficulty switches from the front of the console and fitting them to the rear introducing the ‘four switch woody’.  Most of these that I have seen were manufactured in Ireland.

In 1982 the console was revised again being made completely black in appearance,  this was known as the  ‘Darth Vader’ console. 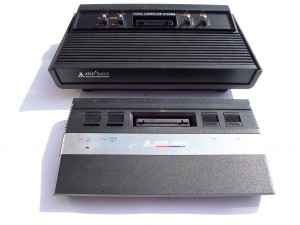 1986 saw two new revised versions of the Atari 2600, these were referred to as the ‘Atari 2600 junior’.   They were planned to be released two years earlier but due to still quite high sales they were put on hold.  Although they were similar in design to the Atari 7800 it was smaller and cheaper to manufacture that the woody.

In appearance they were similar as one had a silver strip on the front and the other was completely black i think to resemble a modern version of the ‘Darth Vader’.  This ran until it was officially retired on the first of January 1992.

Cloned versions of the Atari 2600 were also produced.  A company called Sears created a system known as the tele-games 2600 and featured the original Pong game!  Others like the FUNVISION we produced these resembled the 2600 junior. 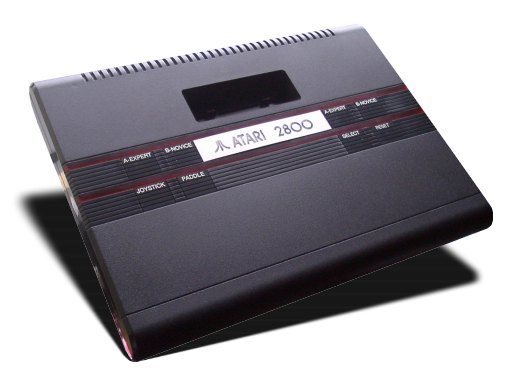 2004  saw an the release of the Atari Flashback, this resembled a small version of the Atari 7800.  This had twenty or so games from the Atari 2600 range, not a bad little plug & play system.

The Flashback 2 was next to be released in 2005, the project was codenamed “Michele”, after Vendel’s wife and even has her name is printed on the motherboard.  This unit was to go back to its roots with the system resembling the original Atari Woody.  The main difference in the consoles design was able to play original Atari cartridges which was a huge bonus.  The usual flick switches were replace with a more modern button setup that hosted slightly different features to the original, the system did however come with mini woody joysticks to keep that retro look.

In 2011, Atari licensed the Flashback concept to a gaming company called AtGames where the next installment called the Flashback 3 was born.  This unit was  3 includes 60 built-in Atari 2600 games, 2 joysticks, and a case design that is similar to the Flashback 2/2+ design, except for front-based joystick ports, no B/W switch, and a different curvature.

Internally the Flashback 3 system uses emulation running on an ARM-based processor instead of Legacy’s “2600-on-a-chip” and is not hackable to add a cartridge port for reading original Atari 2600 cartridges. However, original 2600 joysticks and paddles will work on this system.

On November 13, 2012, the Atari Flashback 4 was released by AtGames.  The console looks similarly like its predecessor, the Flashback 3; however, the noticeable are that the joystick controllers are now wireless and its library have increased to 75 games,15 more than Flashback 3.

A few interesting facts in the Atari 2600’s gaming life span was as it continued to grow is that it had the largest Research and Development divisions in Silicon Valley at the time.  Most of the developers for Atari were not recognized for there efforts and became disgruntled with the company so they left and set up their own companies to write games.  Companies such as Imagic, Coleco and the most prominent of these  is Activision, a fantastic company that has stood the test of time and are still running today.  Atari tried to block these, often ending in Court proceedings but failed.

The Atari image was soon to suffer due to a company called Mystique whom produced a number of  pornographic games for the 2600, the most notorious being Custers last stand (if anyone has a spare copy for sale please let me know lol)  which caused a number of  large scale protests between women of Native American Groups because it depicts  General George Armstrong Custer raping a bound native women.  Atari sued Mystique over this in a Large court battle and won.

Virtually all games today contain speech, music and video clips but when a game contained speech back in 1983, this was quite a feature!  The game ‘Quadrun‘ was one of the first game cartridges ever to contain speech (even though it was only for a few seconds) makes it a very rare and quite expensive title to look for.  Here’s just a few rare titles well worth looking for ‘Tooth Protectors’, ‘Sword Quest’ and ‘Chase the Chuck Wagon’.  A few horror game to also look out for are The Texas Chainsaw Massacre & Halloween.  Another of Atari’s collectibles are toy cars made by ‘Hot-Wheels’ they do turn up from time to time and are a must for any collector.

A great old comedy due Morecambe & Wise made several Atari TV adds some years back that i think are a stroke of genius and they’re all well worth a look. . . lol.

But i think this clip is an absolute classic,  please let me know what you think?

To sum up the Atari 2600, it was and still is the longest living game console with records stating that it spanning a duration of 14 years and 2 months in US gaming history.  I believe that because of versions called the Atari Flashback that are still being made today, in some respect its legacy still has not finished. . .  Long live the Atari 2600! 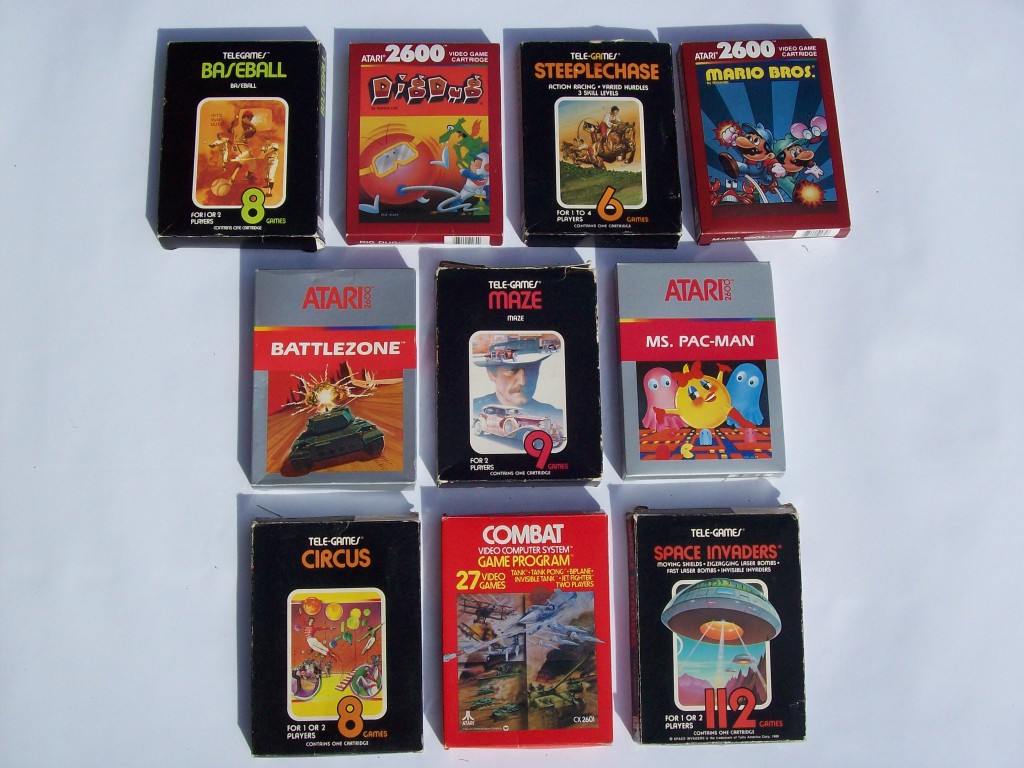