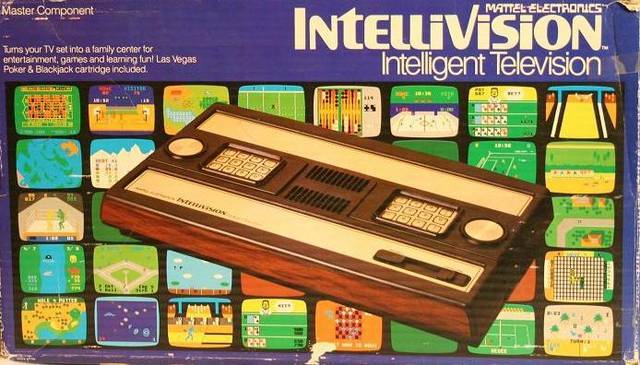 In 1979 Mattel Electronics released its first video gaming console, the Intellivision.  Mattel Electronics was a subsidiary of Mattel and was formed expressly for the development of electronic games.  In its first year Mattel sold 175,000 Intellivision consoles and the library grew from a mere 4 game cartridges which the console was initially released with and to 35 cartridges.  Throughout its lifespan over 3 million Intellivision units were sold and a approximatly 125 games cartridges were released for the console.

A little fact not many people know is that the word ‘Intellivision’ is a portmanteau of  ‘Intelligent Television’.

Like Atari, Mattel marketed their console to a number of retailers as a re-badged unit.  These models include  Radio Shack TandyVision, the GTE-Sylvania Intellivision, and the Sears Super Video Arcade.  The Sears model was a specific coup for Mattel, as Sears was already selling a re-badged Atari 2600 unit, and in doing so made a big contribution to Atari’s success.

By 1982 sales were soaring.  Over two million Intellivision consoles had been sold by the end of t

he year, earning Mattel a $100,000,000 profit.  Third party Atari developers Activision, and Imagic began releasing games for the Intellivision, as did hardware rivals Atari and Coleco.  The ‘Numb Thumb Club’ was also set up by Imagic where members were to recieve annual newsletters consisting of forecoming game releases, contests and special offers.  Unfortunately only two issues of ‘Numb Thumb’ were ever published in 1982 and 1983 before Imagic finally shut up shop.  Mattel then created  M Network branded games also for Atari and Coleco’s systems.  The most popular titles sold over a million units each and then the Intellivision was introduced to Japan by Bandi.

In 1982 Mattel introduced a new peripheral for the Intellivision: The Intellivoice, this was basically a voice synthesis device which produces speech when used in conjunction with certain games.  The Intellivoice was original in two respects.  Not only was this capability unique to the Intellivision system at the time (although Magnavox soon rolled out an akin device for the Odyssey2), but the speech-supporting games written for Intellivoice actually made the speech an integral part of the gameplay. 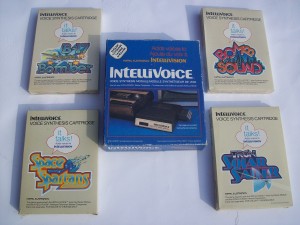 Only a few game titles were written that used the Intellivoice.  Also the amount of speech that could be compressed into a 4K or 8K ROM cartridge was limited, and the system did not sell as well as Mattel had hoped; while the initial orders were as high as 300,000 units for the Intellivoice module and its initial game-cartridge offerings, interest in future titles dropped rapidly until the fourth and last Intellivoice title, Tron: Solar Sailer, sold a mere 90,000 units.   Two other games for children were made in very small numbers called Magic Carousel and Space Cant and are hard to find.  In August 1983 the Intellivoice system was quietly phased out.

The four main titles available for the Intellivoice system, in order of their release, were:

Does a small part of this commercial make you wonder where the Wii-fit comes from?

With over 3 million Intellivision units  sold and a total of 125 games released, it really is up there with the best.  The system was very advanced for its time and with some great add-ons the Intellivision system definately it holds its own and as earned its place in gaming history. . .