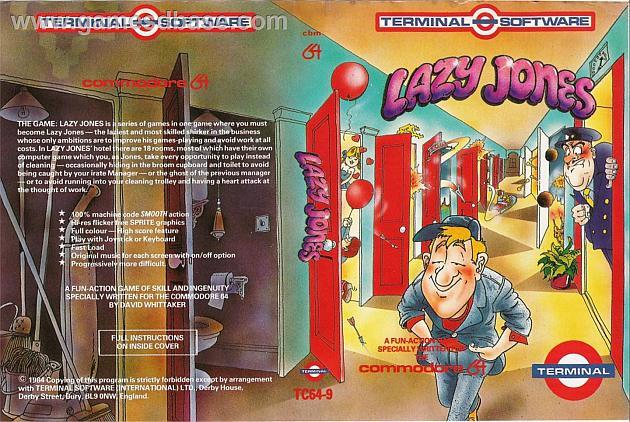 What a superb game this was when it got released and to many true retro-gamers out there still is!  Lazy Jones is definitely one of those games that once you start playing is hard to put down.

The best way to describe it is as a multi-game, within a game, it will become more apparent as you read on.  Written by David Whittaker for Terminal Software in 1984 this is certainly one for you retro gamers out there as it was available on most systems like the Commodore 64, ZX Spectrum, MSX and Tatung Einstein.

Lazy Jones takes place in a Hotel where you control a lazy hotel employee who likes nothing more than to avoid doing any work by sneaking into the hotel rooms to play video games instead.  I’ve never come across a hotel like this with just a video game in each room but it sounds good to me!

The game starts with you guiding the character along one of the three floors in the hotel.  Each floor has six rooms, three either side of a central elevator and the elevator allows you to access the other two floors.  A few things you need to watch out for is the current hotel manager on the top floor who is constantly looking out for you, the ghost of the previous manager on the bottom floor, and a haunted cleaning cart on the middle floor.  The enemies only walk around and do not pursue you, but contact with them is fatal.

Fourteen of the rooms believe it or not have fourteen completely different playable games but unfortunately and quite surprisingly David ran out of ideas for the three remaining rooms so he came up with the idea of a hotel bar which is sort of a points collating room, a bed, a cleaning closet that he strangely walks in, has a look around and walks out of again and a toilet where he goes for a pee.  All this backed up with some great sound tracks, who could ask for more . . .