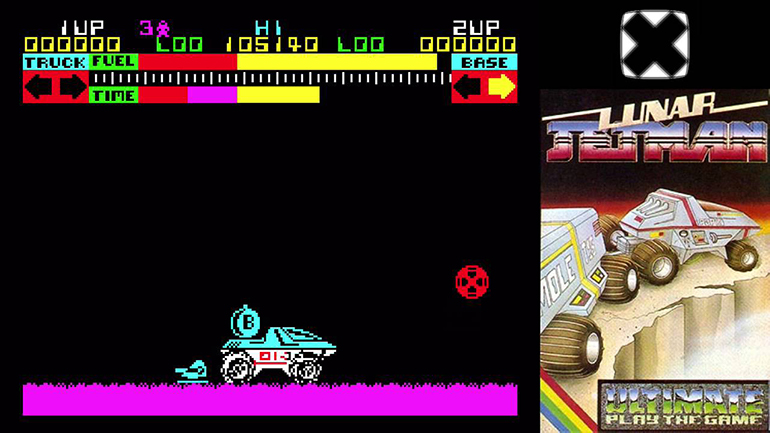 Lunar Jetman was a brilliant sequel to the epic game Jetpac.  Developed and published by Ultimate, Play the Game in 1983, the game was written by Chris Stamper with graphics designed by Tim Stamper from their well known base in Ashby-de-la-Zouch.

Lunar Jetman became an overnight success, this was due to a few key factors.  Firstly, it was Ultimate’s first game to feature speech via the Currah Microspeech peripheral and previous Ultimate games ran on the 16K systems whereas Lunar Jetman was their first game to require 48K of Ram.

This tied in with some addictive gameplay and colorful graphics really set the scene.

The game places you on a moon with a strange purple surface.  Your mission is to locate and destroy the alien bases that will appear, one after the other.  You have been given a few different aids at your disposal to make your mission a little easier.

Similar to previous game, you can walk on the surface or you can lift off and fly around via your Jetpac, making it easier and faster to locate the bases.  At the top right of the screen is a base locator, this will flash either way the base is to be found!  The bases can only be destroyed by collecting the bomb, flying over the base and dropping it to blow it up.

You can fly with the bomb, you will be open to the elements, Ufo’s etc.  However, if you use the moon rover, once inside, you will be protect from any enemies flying about outside.  You only have a certain amount of fuel but the moon rover doubles as a refueling point for Jetman’s jet pack.

As you travel around in the rover, you will come across some craters in the ground.  On finding these you will have to leave the rover and use your bridging kit to restore the surface, this will allow the rover to move on.  Be careful and make full use of you lasers as the aliens will be fast on your trail.

Once you’ve located the bomb.  You will to leave the safety of you rover and lift the bomb onto the back of it using your Jetpac.  There is also a space cannon that can be placed on the bonnet and used to blast the aliens whilst moving about.

With the bomb in place, you can set of in search of the alien base.  On arriving at the base beware of small pylons shoot that will shoot at you.  You will have to leave the rover, pick up the bomb and drop it on the rotating missile base, this is easier said than done!

To complete your mission, you have a certain time limit as shown on the top of the screen.  If this limit expires before the base is destroyed, two missiles are launched from the base—one for Earth, the other for Jetman’s rover.  The player will be given a limited time to intercept and destroy the missiles whilst still in flight, thus preventing a game over!

Once destroyed, a new base will appear and you mission will start all over again.   After several of the alien bases have been destroyed, new and increasingly hazardous varieties of flying aliens will start to attack so you need to be on the ball so to speak!

Besides the space cannon and the bridging kit, another piece of equipment is at you disposal if you choose to use it.  This a a pair of  teleporters.  These can be used to transport instantaneously to the teleporter’s twin, thus allowing rapid transport around the moon.

The game was praised by several computing magazines.  Crash rated the game 95%  praising the graphics and wide spectrum of colours, noting that whilst the presentation did not differ much from its predecessor, the graphics were “every bit as good”

Lunar Jetman was also voted number 31 in the Your Sinclair Official Top 100 Games of All Time.  Home Computing Weekly placed Lunar Jetman third in their “Top 10 programs for the ZX Spectrum” in a later 1983 issue.

I don’t normally like re-makes but this remake was released on the PC in 2015 I think.  They kept to original gameplay but upgraded everything, with dazzling graphics, sound effects very similar to the original and a great soundtrack to boot, whats not to like!

I’m dedicating this post to Rick Dickinson, designer of a great number of the ZX Spectrum incarnations, from the ZX81 with its touch sensitive keyboard, through the ZX Spectrum with its rubber keyboard, the Sinclair QL’s casing, and now the forthcoming ZX Spectrum Next, who sadly passed away on April 24th, 2018. 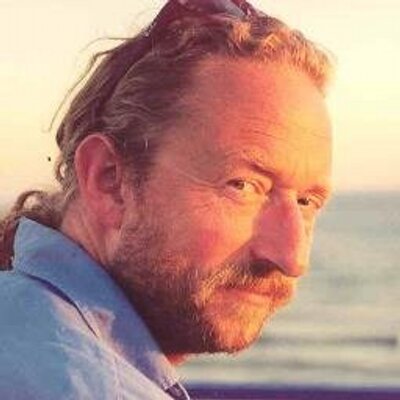