ube was released to use in Europe on the 3rd May 2002 costing 169.00GBP.  It was Nintendo’s fourth games console but most importantly it was Nintendo’s first non-cartridge console and was to compete against Sony’s PS2 and Microsoft’s X-Box. Throughout its life the Nintendo’s Gamecube sold nearly 22 million units and in September 2009, IGN named the GameCube the 16th best gaming console of all time.

Here is a Gamecube Commercial with quite a good metaphor, the game is within the cube.

Details of the project that Nintendo code-named Dolphin were first released at E3 in 1999.  There were various names in the pipeline for Nintendo’s next gen games console such as the Nintendo Starcube, the N-Cube even and Dolphin itself before Nintendo finally settled on the Nintendo Gamecube. The Gamecube was also released in various colours.  Indigo and Jet Black consoles were the first to go on release.  Silver consoles were marketed as  limited edition colours, but Spice (Orange) along with many other colours and styles were only to be released in Japan.

The  Gamecube was designed purely for gamers and had a huge compliment of third party developers which gave us games series like Zelda, Metroid, Mario Bros, and not forgetting  Donkey Kong with Kongo Bongos lol.

Connectivity allowed a Game Boy Advance to be connected to the Gamecube via a game boy advance cable.  This enabled the user to unlock new game levels, swap data or use the Game Boy Advance as an input device.  (very clever i thought)

Network capabilities through a broadband adapter also allowed on-line gaming. This allowed multiple Gamecubes could be connected together so more than four players could battle it out in heated tournaments between a group of friends and did away with split-screen gaming.

I was also quite amazed t 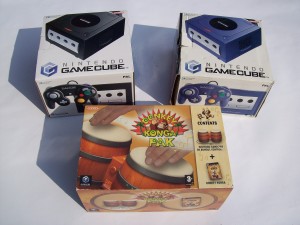 o see the size of the Gamecubes game discs. They were only three inches wide but could hold a whopping 1.5 Gigabytes of information and unlike cartridges these discs were able to move data at lightning speeds.

There are two secret start-up tunes for the GameCube.  If the Z button is pressed on one controller during startup, the sounds of a squeaking toy, xylophone, springs, and childish laughter will play in place of the original tune.  If four controllers are connected and all four Z buttons are pressed, kabuki – style sounds will be played, including vocalization and drumming.

Clones were also made of this console and one in particular was the Panasonic Q  (SL-GC10).  Released on December 13, 2001 this system was really how the Gamecube should have been originally released and just to look at the design of it made you want one.  Features like a backlit LCD, a front-loading slot disc tray, an optical sound output supporting Dolby Digital 5.1, a separate subwoofer jack, and a stainless steel chassis made this the cube to own.

he DVD-ROM drive in the Q is meant to read both video DVDs and GameCube discs. Because of this, the laser used in the drive is better able to read all types of burned GameCube games; a burned game that a standard GameCube refuses to play might be read fine by a Q. However, the Q still requires the installation of a modchip (such as the Qoob Pro or SX) to play burned games. 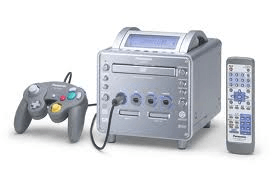 Panasonic and Nintendo announced they were ceasing production of the Q in December 18, 2003 due to low sales. As it is quite possible to obtain a standard GameCube and a standalone DVD player for less than the price of the unit, the Panasonic Q therefore is not a very common system with only a small number of systems out there, they can be purchased for around £250.00 to £300.00 for a nice clean boxed version.