There as been many pin 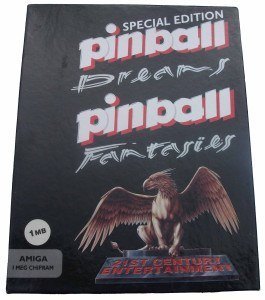 ball games and simulators written for many retro systems over the years but the pinball simulators that were released on the Commodore Amiga by Digital Illusions in 1992 have got to be some of the best.  The first instalment was Pinball Dreams, and what a result.

What brought these versions of Pinball to life is the way that the game is viewed.  Most pinball games are either played on a full size flat screen or with the tables angled back to give a 3D perspective, not so with these.   The pinball table actually scrolls up and down the screen to give you a much larger playing area, tied together with good sized bold graphics, great sound tracks and effects, these games became great to play in a group of friends making them very competitive and addictive.

With Pinball Dreams and Pinball Fantasies you could choose from four different tables within each game.

The games on Pinball Dreams were:

I personally like Pinball Dreams but the sequel Pinball Fantasies took the game to another level.  Although the layout was similar to Pinball Dreams the game had many more features enabling the player to get higher scores and becoming much more involved in the game.

Due to the popularity of these games other sequels were written called Pinball Iullusions and Slam Tilt but I personally prefer the first two instalments.

Unbelievably, there is a Commodore 64 version that has only yet been partially created.  Still this demo shows how good the conversion is comiong along and I for one can’t wait for it to be finished