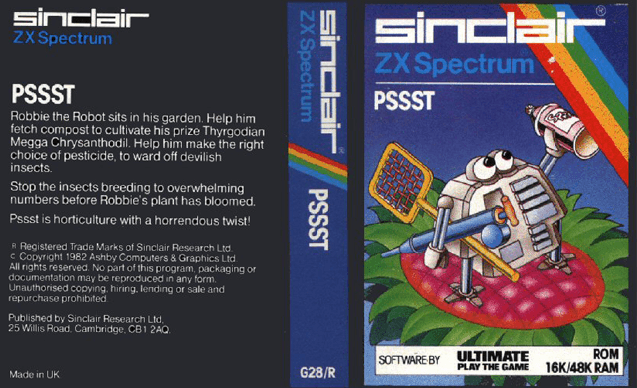 Here’s a really unique game that was written by Chris and Tim Stamper for the great  software    house ‘Ultimate Play The Game’, PSSST was released in 1983 and became a huge hit for Sinclair’s ZX Spectrum as did many of Ultimate’s titles.

In the game you control a Robot called Robbie and the aim of the game is to protect a plant that is growing at the bottom of the screen, a Thyrgodian Megga Chrisanthodil plant as well !

As the plant slowly grows it will constantly be bombarded from various insects like Scuttling Leeches, Interstellar Space Slugs, Wasps and Menacing Midges, if these nasty’s reach the plant they will prevent the plant from growing and it will start to shrink until it dies.  If the plant shrinks beyond the section where the insect is feasting, the insect is released, but it may immediately reattach lower down.

As the plant grows it will sprout leaves which increase the growth rate but will also make it more vulnerable to the insects.  Once the plant reaches a predetermined height, it flowers and the player moves to the next level.  To help kill the insects, located on either side of the screen are some ledges that hold three different spray cans that contain three different pesticides these are colours Red, Yellow and Turquoise. 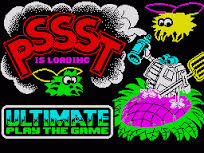 Each can will have a different affect, it will either kill, stun, or have no effect on the insects.  Robbie can only carry one type of pesticide at a time, and in the early stages of the game the kill pesticide can be carried at all times, however later stages have more than one type of insect on screen at once, making the choice of pesticide more tactical.

During the game different bonus items will also appear such as Garden spades, fertilizer and fly swats, collecting these will help with the plants growth.

As with may of these old time classic it’s never long before people revive them even as an app to play on phones, this is just one out of many. 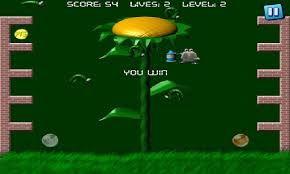 It seems like they have altered the colours on this version to look more realistic.  On the original its Green and Pink and i’ve never seen a sunflower that colour before.