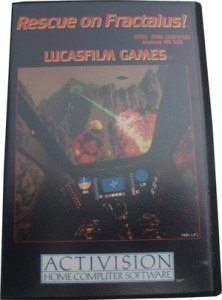 This is fantastic game and out of all the systems it was made for, it is best played on the Atari 800.  Rescue on Fractalus was released in 1984 by Activision for Lucasfilm Games which later became Lucasarts.  The game is based around a rescue mission where you have to try to locate and retrieve downed pilots on a planets surface.  The game is played in the daytime but later levels are played at night where you do rely on your instruments for survival.

The first scene see’s you leaving the mothership in your Valkyrie space fighter and head towards the perilous planet down below.

In your ship you are presented with a cot-pit in a first person view.   Your instruments consist of a Compass, a Wing Clearance bar, a Thrust Indicator, a Dangerous level Indicator, an Altimeter, a Targeting Scope with cross hairs, an Enemy Lock-On Indicator, an Energy Level Indicator, a Long Range Scanner, a Shields On/Off Switch, an Air-Lock Switch and a Mothership Indicator.

The planet consists of a craggy mountainous range with a thick acidic atmosphere which you have to fly through.  Be careful as flying saucers will come firing at you and there are gun turrets placed on some of the mountain tops shooting down at you.

Once you lock on a pilot with the long range scanner you can back off the power and slowly fly in till he comes into sight.  Once you have landed you can cut the power and he will then run towards your ship,  however if you turn the engines back on,  he will be incinerated.  This part of the game is very atmospheric and in a dark room with a large screen and the sounds played through a surround system it does draw you in, making the game quite intense.

Once the pilot has reached your ship he will bang frantically on the air lock for you to let him in, if you don’t let him in, his banging will get less and less and he will eventually die.

When I first played the game I didn’t realize there are two types of alien,  one with a white head and one with a green head.  If the pilot’s head is white then he is one of your men, but if the head is green then he is an Alien from the planet known as a Jaggi.

Again he will run to the ship an bang on the door a few times, then he will jump onto the screen trying to break through to kill you. This really made me jump when I first played the game and the only way to kill him is to switch on the engines.  If you do open the air-lock and let him in he will cause havoc smashing up you ship making you crash.

Here’s a preview of a remake of the game that looks pretty good but I would have liked to have seen an alien attack. It would be nice to see when its finished.

This game has a great storyline with plenty of action all crammed into 48K on the Atari 800 and is one not to be missed . . .

N.B. If you look closely, the writing on the alien’s chest is the initials of the programming team turned sideways.