The Sinclair ZX Spectrum Home Computer was an 8-bit machine that was released to us in the UK back in 1982 by Sinclair Research.

It was Clive Sinclair, an Oxford born gentelman from Cambridge who founded the company in 1980 when he released the first of his computers the ZX80.  It was later in life that due to Clives great achievements for inventing in computers and machines like the sinclair C5 that Clive Sinclair earned himself a Knighthood for “Services to British Industry” it was then that he became  Sir Clive Sinclair.

Lets not forget Rick Dickinson who was the designer for the Sinclair Spectrum.  Born on Yorkshire, he graduated from Newcastle Polytechnic in 1979 with a First Class Bachelor of Arts Honours degree in Design for Industry.  He sadly died on April 24th, 2018.  A great loss but never forgotten.

During development, the sinclair spectrum was referred to as the  ZX81 colour and also the ZX82 but i remember it i think like most users as a ‘Speccy’.  The word Spectrum was used to highlight the range of colour’s it could display as shown with a band of colours like that of a rainbow displayed on the bottom right hand side of the spectrums case.

Hardware design was by RichardAltwasser of Sinclair Research, and the machine’s outward appearance was designed by Sinclair’s industrial designer Rick Dickinson.  Later issue machines required the fitting of 8 dynamic RAM chips and a few TTL chips. 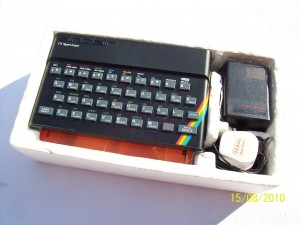 The original ZX Spectrum will always be remembered for some of its weird and wonderful attributes.

Its rubber keyboard with its dead flesh feel.  This was notorious for the membraine under the keypad to gradually go brittle causing the tracking coming away from the plastic which over time resulted in partial or total keypad failure.

The sound output came from a little built in beeper on the machine board.  The Beeper was capable of producing one channel with 10 octaves.  I can remember hearing digitized speech on a game (can’t remember the title) and it sounded dreadful.  The machine also includes audio in/out ports for the connection of a cassette recorder for loading and saving programs and data.  As there was no volume control, it was possible to play the sound through a cassette recorder which wasn’t really that much better.

Due to its lack of sprites, colour clash or attribute clash was caused with some bizarre effects in the animated graphics of arcade style games.

Several peripherals for the Spectrum were marketed by Sinclair: the ZX Printer was already on the market, as the ZX Spectrum expansion bus was backwards-compatible with that of the ZX81.

The ZX Interface 1 add-on module included 8 KB of ROM, an RS-232 serial port, a proprietary LAN interface (called ZX Net), and an interface for the connection of up to eight ZX Microdrives – somewhat unreliable but speedy tape-loop cartridge storage devices released in July 1983. These were later used in a revised version on the Sinclair QL, whose storage format was electrically compatible but logically incompatible with the Spectrum’s.

There were also a plethora of third-party hardware addons.  The better known of these included the Kempston joystickinterface, the Morex Peripherals Centronics/RS-232 interface, the Currah Microspeech unit (speech synthesis), Videoface Digitiser, RAM pack, the Cheetah Marketing SpecDrum, a drum machine, and the Multiface, a snapshot and disassembly tool from Romantic Robot.

Sinclair licensed the Spectrum design to Timex Corporation in the United States.  An enhanced version of the Spectrum with better sound, graphics and other modifications was marketed in the USA by Timex as the TimexSinclair 2068.  Timex’s derivatives were largely incompatible with Sinclair systems.  However, some of the Timex innovations were later adopted by Sinclair Research.  A case in point was the abortive Pandora portable Spectrum, whose ULA had the high resolution video mode pioneered in the TS2068.  Pandora had a flat-screen monitor and Microdrives and was intended to be Sinclair’s business portable.  When Alan Sugar bought the computer side of Sinclair it got ditched (a conversation with UK computer journalist Guy Kewney went thus: AS: “Have you seen it?” GK: “Yes” AS: “Well then.”).

In the UK, Spectrum peripheral vendor Miles Gordon Technology (MGT) released the SAM Coupé as a potential successor with some Spectrum compatibility.  However, by this point, the Commodore Amiga and Atari ST had taken hold of the market, leaving MGT in eventual receivership.

Many unofficial Spectrum clones were produced, especially in the former Eastern Bloc countries (e.g. in Romania, several models were produced (Tim-S, HC85, HC91, Cobra, Junior, CIP, CIP 3, Jet) , some featuring CP/M and a 5.25″/3.5″ floppy disk) and South America (e.g. Microdigital TK 90X and TK 95). In the Soviet Union, ZX Spectrum clones were assembled by thousands of small start-ups and distributed though poster ads and street stalls. Over 50 such clone models existed.  Some of them are still being produced, such as the Pentagon and ATM Turbo.  In India, Decibells Electronics introduced a licensed version of the Spectrum+ in 1986.  Dubbed the “db Spectrum+”, it did reasonably well in the Indian market and sold quite a few thousand until 1990 when the market died away.

The Commodore 64 was a major rival to the Spectrum in the UK market during the early 1980s. The BBC Microcomputer and later the Amstrad CPC range were other major competitors. The ZX Spectrum has incurred a resurgence in popularity thanks to the accessibility of ZX Spectrum emulators, allowing 1980s video game enthusiasts to enjoy classic titles without the long loading times associated with data cassettes. Over 20,000 titleshave been released since the Spectrum’s launch and new titles continue to be released, with over 60 new ones in 2009.  I personally like the  Ultimate (play the game) range of software such as PSSST and Cookie.

To be honest as a teenager i didn’t like  zx spectrum much as i was an avid Commodore 64 user.  After buying one some years back building my collection, i started playing various games and getting to know the the zx spectrums personality a lot more and i was pleasantly surprised to find that the more you use it, what seemed like major flaws with the spectrum faded away and you accept it for what it is which it is really quite a likable machine.

About 60,000 “Issue 1” ZX Spectrums were manufactured; they can be distinguished from later models by the colour of the keys (light grey for Issue 1, blue-grey for later models).  The serial numbers of the rear of the computers were green for the early models and red for the later ones.

I still like to play the odd game now and again on the spectrum despite numerous emulators being out there.  As there are in excess of 5 million units worldwide, i am quite sure i won’t be alone and the zx spectrum will still be around for many years to come. . .