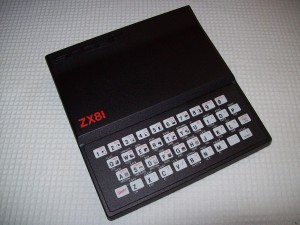 The Sinclair Zx81 is another of Sir Clive Sinclair’s well known achievements.  The distinctive appearance was the work of industrial designer Rick Dickinson that was Manufactured by Sinclair Reasearch Ltd and released on the 1st of June 1981.

The Zx81 was  a cheap Home Computer that anyone could afford and was initially sold via mail order in kit form.  The Sinclair ZX81 was  priced at £49.95 for an un-assembled unit or £69.95 assembled.

Clive Sinclair’s business acumen became apparent when he struck a deal was made with W. H. Smiths to help with sales of the ZX81 and to also make it easier to purchase the systems accessories such as a Thermal Printer and a 16K Ram Pack although 32k and 64k ram packs became available later.

Companies such as D’Ktronics and Memoteck also saw a shrewd business opportunity.  Due to the somewhat terrible design of the original membaine keyboard, they designed, built & supplied a full size keyboard that was contained in a much better case making the system much more desirable and easier to use.

The Sinclair ZX81 used a ZX80a processor and was supplied with a 1KB of RAM and 4k ROM.  This was to hold the computers system variables, the screen image and any programs and data.  The  graphics were primarily generated by software in the zx81 ROM, it was possible to override the interrupt service routine and generate the display yourself.

This enabled a resolution of 256 x 152 rather than 64 x 78 to be achieved but obviously the graphics were very blocky although a company called ‘Software Farm’ use this technique.

I would have loved to have seen a version of Tomb Raider!!! Having said that, at a gaming convention, the ZX81 was featured playing a full version of the classic game Dragon’s Lair!

The zx81 was not without it’s flaws.  It was re-noun for crashing, commonly known as a ‘Whiteout’ if a ZX 16k RAM pack was connected and the computer and was move or nudged.  This was due to the insecure mechanical connection of the RAM pack to the computer.  This was more commonly known as the infamous ‘RAM Pack Wobble’.  Many users would use blue-tak or selotape to secure the RAM pack to prevent hours of programming being lost.

Clone versions of the Sincla 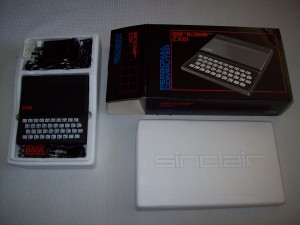 ir zx81 were also made.  These arrived in different countries such as Brazil, Argentina and when the zx81 was sold in the US from its facility in New Hampshire.

The Sinclair ZX81 sold an amazing 1.5 million units in it’s liftime, but was eventually replaced by the Sinclair ZX Spectrum which boasted 16k and 48k of memory, Sound and Colour Graphics as standard which the ZX81 never had.