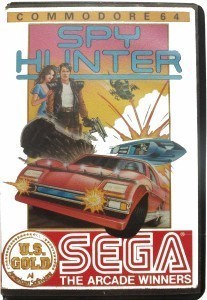 Spy Hunter . . . What a Game !  This was a huge game in the arcades when it was released back in 1983 by Bally Midway and became even more popular when it was ported to a large number of home computer systems by SEGA/ U. S. Gold.

On it’s release in the arcade the game was classed as ‘a riveting turbo charged espionage adventure’ and they wasn’t wrong.

Your mission is to destroy as many of your enemies as you can whilst protecting civilians along the way.  Your enemies come in many different forms and you will be attacked from every angle so you need to be prepared.

The opening scene of the game is when you control a fictitious G-6155 Interceptor that is a kind of armoured sports car with special abilities that reverses from the rear of an articulated lorry on ramps.

This is no ordinary lorry,  this is your special weapons vehicle that you can board during levels to increase your cars weaponry and initially you are only armed with machine guns to the front of your vehicle.  Three special weapons are available: oil slicks, smoke screens, and surface-to-air missiles.  Each has limited ammo and are lost if the player’s car is destroyed.  The game’s dashboard shows which weapons are available, when lit.

As you progress a counter increments the score while the car is moving and on the road.  Additional points are earned destroying enemy vehicles using weapons or as I prefer by forcing them off the road.  Your vehicle can be destroyed by either

The car can be destroyed by a hard collision with another vehicle or if it is hit by an enemy weapon, including the craters blasted into the road by the helicopter’s bombs.  If you do hit any civilians then you will receive any point for a short duration and the weapon vehicle will only appear once on a mission instead of twice.

During the game you will encounter different environments sure as snow and ice making your car a little twitchy, the main feature is the transition is when your car turns into a boat.  This normally happens when the bridge is out and you have to drive through the boat house on the side of the road.

The gameplay is similar to that of the road but you get two different enemies trying to kill you in speedboats.  They are the Barrel Dumper, he will try to block your path by dropping barrels from the rear of his boat or Dr  Torpedo, and has his name suggests he will try and blow you up with torpedo’s.

The villains you will encounter are:

He is protected by bullet proof plating making his vehicle impervious to your  machine gun bullets.

He dives a rather nice limousine with gangsters firing from the rear window.

This looks like an ordinary vehicle but when you get close to him tyre slashers  protrude from the wheels, similar to the good old James Bond car.

This psychopath tries to drop bombs on your vehicle or in your path to try and destroy you are make you crash.

Two different types of arcade cabinet was created, a standard upright version featuring a futuristic aircraft style of steering wheel incorporating fire buttons, a gear stick and an accelerator pedal and a sit down version was similar controls.  These features were to enhance the game play and to emphasise that you was playing no ordinary driving game.

There was plans to incorporate your vehicle turning into a  helicopter but there wasn’t enough memory to add this feature so it was scrapped.

An electronic arrangement of Henry Mancini’s theme to Peter Gunn plays throughout the game and brings it to life however early versions of the game used the James Bond theme by Monty Norman, but the inability to obtain the rights to use the music forced Midway to change this theme.