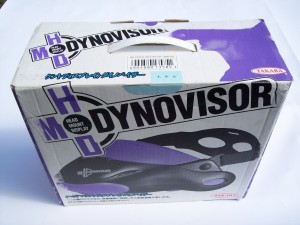 Well what can i say about purchasing a HMD Dynovisor! lol.  These headsets were renown for being rubbish and make no mistake the rumors are true, but when one turned up a while back and having obviously hardly been used, it was another ageing classic that i had to have for my retro collection.

In 1994, Atari teamed up with a company called Virtuality to produce a VR headset system (red unit) aimed at the home market.  The result was a low resolution headset being produced, that Atari officials rejected.  Back at the drawing board most of the flaws were ironed out and a much better VR headset (blue unit) was produced.  This had better voice communication, higher resolution and IPD (Inter Pupil Distance) but by the time this was finished, Atari had pulled the plug.

Two new products later appeared making use of  Jaguars VR HMD Technology, these were the Philips Scuba Visor and the Takara Dynovisor.  These were virtually identical to each other (pardon the pun) and also to the Jaguar VR headset. They were both to offer ground breaking technology boasting a whopping 120″ display and using Sony Active TFT & LCD Lenses.

Unfortunately only one game was believed to work utilizing the head tracking technology.  This was the Atari Jaguars Missile command, the 3d version and the Virtual version.