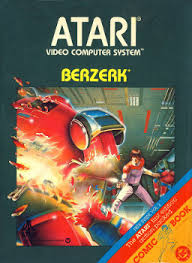 Berzerk is a very simplistic game that takes me back to the 80’s reminding me of Battle Star Galactica for some reason, I think it was the Cylons in the series that are quite similar to the robots in the game.

Berserk is multi-directional shooter video arcade game  that was released by Stern Electronics of Chicago way back in 1980.  It was initially released in the arcades but was later ported to video game systems like the Atari 2600, Atati 400 & 800, Atari 5200, Commodore 64, Vectrex and even the Vic 20,

The game was the brainchild of a guy called Alan McNeil who was an employee of Universal Research Laboratories (a division of Stern Electronics).  One night Alan had a vivid dream of a black and white video game involving robots that he had to fight to stay alive, it sounds more like a nightmare to me!

He believed that the dreams he had stems from playing a board game called Robots which is similar to the board game Darleks in the UK.  This was the basis for Berzerk, but the name came from Fred Saberhagen‘s series of science fiction novels called Berserker.

Here’s a clip of the arcade version

In the game your appear in what seems to be a simple type of maze as a green stick man that is called a Humanoid.  You are armed with a Lazer gun that use to defend yourself as you try to destroy the roaming robots that reside in the mazes.

Here’s an advert for Bezerk on the Atari 2600

The character Evil Otto is represented by a smily face that after a certain amount of time will appear, bouncing on screen towards you so you need escape by leaving the screen as soon as possible.  The destinct features of Otto are that his sights are fixed soley on you, he will travel through walls and take to shortest route to try and kill you.

He will only move about half your speed if other robots are still present on screen but he will speed up to match your speed once all the robots are killed.

He can only match the same speed as the player whilst moving left and right but he can move faster than the player moving up and down, your only chance is that no matter how close Otto is, you can escape as long as you can avoid moving straight up or down.

You aim is to try and kill all of the robots in the maze and exit to the next level via exits on the edge of the screen before Otta makes an appearance.

A problem I sometimes find in the game is that you have no control as to where you materialise in the maze, this can be awkward as you might appear with numerous robots around you making it sometimes impossible to escape.  For the beginner, this often means several deaths in rapid succession, as each death means starting a new maze layout.

Here’s the Vic 20 version for comparison

The game has 64,000 different mazes, each with a level of difficulty that constantly increases.  Due to limitations of the random number generation there are fewer than 1024 maze layouts (876 unique).

A plus point is that most of Bezerk’s robots aren’t the brightest and are renoun for killing themselves by either running into the electrified walls, colliding with each other or colliding with Otto himself!

As you progress and your score increases, the colors of the enemy robots change, and the robots can have more bullets on the screen at the same time.  Once they reach the limit of simultaneous onscreen bullets, they cannot fire again until one or more of their bullets detonates; the limit applies to the robots as a group, not as individuals.

Each robot destroyed is worth 50 points and ideally, if all the robots in the current maze have been destroyed before you escape the maze, gains your a maze bonus of ten points per robot.

Two different versions of the game were released.  In the original version, the sequence goes as follows:

The revised version, which had the much larger production run of the two, features a longer color sequence after the cyan robots:

The game only allows up to six shots on the screen at one time.  This includes the player, and a total of five from any of the robots at any one time.

To balance the greatly increased threat from the robots in the second version, Evil Otto’s pursuit speed remains at its normal level—half or equal the player’s speed—throughout.

The game was probably best-remembered for the talking robots. Bezerk was one of the first video games to use speech synthesis and some of the simple phrases out of the game made it to the music and television scene.

In 1982, artists Buckner & Garcia recorded a song called “Goin’ Berzerk”, that used some of the sound effects from the game, and released it on the album Pac-Man Fever. It also features on the 1988 acid-house track Stakker Humanoid.

On television it featured on shows such as My Name is Earl (Season 1, Episode 8),  In The Simpsons episode “Homer Goes to College” and the Futurama episode “Fear of a Bot Planet”

In 1983 MB (Milton Bradley) made a few board games based on arcade games.  Besides Bezerk were Donkey Kong, Pacman, centipede and Frogger.  I predict that some of these will becoming quite rare collectable and will only go up in value so if you come across any, snap em up!

Tradgically Berzerk was the first video game known to have been involved in the death of a video game player.  Peter Burkowski made the Berzerk top-ten list twice in just fifteen minutes, just a few seconds before sadly dying of a heart attack at the age of only 18.