The Atari 520st was offi

cially launched to us by the Atari Corporation in January 1985 at the Winter Consumer Electronics Show in Las Vegas.  The letters “ST” stands for “Sixteen/Thirty-two”, which refers to the Motorola 68000’s 16-bit external bus and 32-bit internals.

Other machines that arrived at a similar time were the Apple Macintosh and the main contender being the Commodore Amiga.  Although the Amiga had custom processors which gave it the edge in the games and video market, the Atari ST was generally cheaper, had a slightly faster CPU, and had a high-resolution monochrome display mode, ideal for business and CAD.

The Atari ST was also to be the first home computer to feature integrated MIDI support.  Thanks to this unique feature the system enjoyed great success for running music-sequencer software and also more importantly as a controller of musical instruments among amateurs and professionals alike.

The members of the ST family are listed below, in rough chronological order: 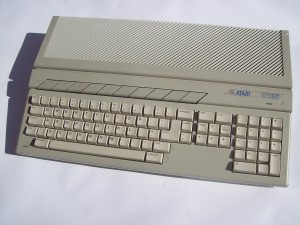 original model with 512 kB RAM.
130ST
intended to be a 128 kB variant. Announced at the 1985 CES alongside the 520ST but never produced.
520ST+
early 520STs with 1 MB of RAM, but without floppy disk
260ST
originally intended to be a 256 kB variant, but actually sold in small quantities in Europe with 512 KB. Used after the release of the 520ST+ to differentiate the cheaper 512 KB models from the 1 MB models
520STM
a 520ST with a built-in modulator for TV output.
520STFM
a 520STM with a newly redesigned motherboard in a larger case with a built-in disk drive.
1040STF
a 520STFM with 1 MB of RAM and a built-in double-sided floppy disk, but without RF modulator.
1040STFM
a 520STFM with 1 MB of RAM and a built-in double-sided floppy disk with RF modulator.
Mega ST (MEGA2, MEGA4)
had a redesigned motherboard with 2 or 4 MB of RAM, respectively, in a much improved “pizza box” case with a detached keyboard.  Early models did not include the BLiTTER chip; most did.  Also included was a real-time clock and a internal expansion connector.
520STE and 1040STE
a 520STFM/1040STFM with enhanced sound, the BLiTTER chip, and a 4096-color palette, in the older 1040 style all-in-one case.
4160STE
as 1040STE but with 4 MB of RAM.  This machine was never officially released except a small quantity of development units.  Labels were sent out to dealers so they could affix them to the machines that had been upgraded to 4MB.
Mega STE
same hardware as 1040STE except for a faster 16 MHz processor, an onboard SCSI controller, additional faster RS232 port, VME expansion port, in the TT case
STacy
was a portable version of the ST.  Originally designed to operate on 12 batteries for portability, when Atari finally realized how quickly the machine would use up a set of batteries (especially when rechargeable batteries of the time supplied insufficient power compared to the intended alkalines), they simply glued the lid of the battery compartment shut, and funnily enough, this machine was soon discontinued.
ST BOOK
was a later version of the portable ST, more portable than the STacy machine, but sacrificing several features in order to achieve this — notably the backlight, and internal floppy disk mainly to save power.  Files were meant to be stored on a small amount (one megabyte) of internal flash memory ‘on the road’ (as it was known) and transferred using serial or parallel links, memory flashcards or external (and externally powered) floppy disk to a desktop ST once back indoors.  The screen is highly reflective for the time, but still hard to use indoors or in low light, it is fixed to the 640×400 1-bit mono mode, and no external video port was provided.  For its limitations, it gained some popularity, particularly amongst musicians of the era.
Here’s a nice little line-up of games that I remember vey well.

As originally released in the 520ST:

Very early machines included the OS on a floppy disk due to it not being ready to be burned to ROM (Like the Amiga 1000 had).  This early version of TOS was bootstrapped from a very small core boot ROM, but this was quickly replaced with (expanded capacity) ROM versions of TOS 1.0 when it was ready.  (This change was also greatly welcomed as older ST machines with memory below 512 KB suffered, as GEM loaded its entire 192 KB code into RAM when booting the desktop).

Having the OS loaded from disk was due to Atari trying to rush the machines to market without ironing out all the bugs in the OS.  Soon after this change, most production models became STFs, with an integrated single- (520STF/512 KB RAM) or double-sided (1040STF/1024 KB RAM) double density floppy disk drive built-in, but no other changes.  The next later models used an upgraded version of TOS – 1.02 (also known as TOS 1.2).

Another early addition (after about 6 months) was an RF Modulator that allowed the machine to be hooked to a colour TV when run in its low or medium resolution (525/625 line 60/50 Hz interlace, even on RGB monitors) modes, greatly enhancing the machine’s saleability and perceived value and saving the cost of having to purchase a monitor for the system.  These models were known as the 520STM (or 520STM).  Later F and FM models of the 520 had a built in double-sided disk drive instead of a single-sided one.

The ST featured a large number of ports mounted at the rear of the machine.

I never really got to grips properly with the Atari ST because although i had heard of it, it had somehow passed me by.  Truthfully,  i think it was probably because i was an avid Amiga user and surrounded by hardcore Amiga enthusiasts lol.  Similar to my Sinclair Spectrum experience, once again i purchased a nice boxed version to add to my collection but this time, after using the Atari ST and getting to know it a little better i found that there really wasn’t much difference between the Atari ST and the more expensive and as popular Commodore Amiga.

I firmly believe because of the Atari STs low cost, built-in MIDI ports, and fast, low-latency response times this made it a fantastic piece of Hardware for musicians to play around with.  The following supporting facts really speak for themselves: