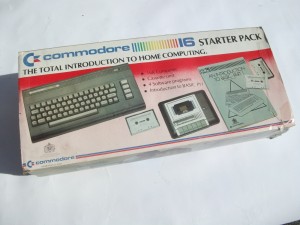 The Commodore 16 home computer was another of Jack Trammels creations.  To be honest it was not one of his greatest ventures by any means, but still it was made by Commodore computers and released in 1984. The system came in a starter pack which consisted of a Commodore 16 computer, a 1531 cassette player and an Introduction to Basic part 1  that was on 2 cassettes as the basic language was made easier to use than that of the Vic 20 and the C64.  The Commodore 16 was mainly known by users as the C16 and the system was one of three computers in its family, with its bread-bin style casing and a keyboard similar to the Vic 20 & C64, but in different colours.  That is where the similarities end.

On the Commodore 16s release I didn’t know much about the system and its hardware.  However I  still seriously wanted to own one when it made its appearance in the local high street stores, mainly because the C16 arrived after the C64 so I assumed it would exceed the C64’s capabilities and it would automatically be a far superior system (nothing wrong in wishful thinking ).  After a bit of research I abandoned the idea of buying a C16 and it wasn’t until a few years back when i found a fairly nice boxed system to add to my collection. . .

As a games machine, there was eventually quite a large library of games available and later some of the great classics arrived like Beach-head, Jet Set Willy, Ghost & Goblins, Exploding Fist and Airwolf etc due to them ported from the Commodore 64.  A plus point was that due to the size of the memory being smaller than that of the C64 the games loaded quite quickly.  I did feel rather disappointed to discover that the C16 was not backward compatible with the Vic 20 or forward compatible with the Commodore 64.  However it was somewhat compatible with the Commodore plus 4.  It might just be me but  I could never understand why the C16 was born as it seemed to be a backward step (good old Mr. Trammel). 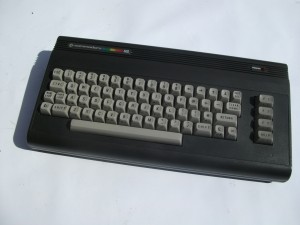 From a practical user’s point of view where three tangible features that the C16 lacked.  They were a modem port, a VIC-20 and C64-compatible Datassette and a game port on rear of the computer.  Commodore did sell a C16 family-specific cassette player (the Commodore 1531) and joysticks, but third-party converters allowed the use of the abundant, and hence much less expensive, VIC-20 and C64-type units that soon appeared on the market.   Apparently the official reason for changing the joystick ports was to reduce RF interference.

The C16s serial port (Commodore’s proprietary “serial IEEE-488 bus”, no relation to RS-232 and the like) was the same as that of the VIC-20 and C64, which meant that printers and disk drives, at least, were interchangeable with the older machines although.  The Commodore 1551 was made solely for the C16 and is very similar to the mark I 1541 used by C64 users except for one major d 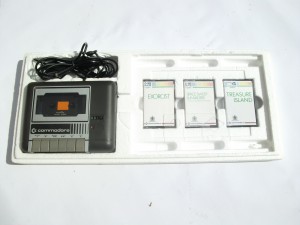 ifference. . . . speed!  The 1551 uses a parallel port (in the attached cartridge) instead of the machine’s serial port, the net result of which is much better transfer speeds and of course , it is colour- coded to match the C16/+4 range.

The latter two models never made it to production. All these computers used a 6502 compatible MOS 8501 that was clocked approximately 75% faster than the 6502 and 6510 used in the VIC-20 and C64 respectively, and a MOS Technology TED all-in-one video, sound, and I/O chip. The Plus/4’s design is thus philosophically closer to that of the VIC-20 than of the C64.

Performance-wise the system slotted quite comfortably between the VIC-20 and 64, with 16 KB of RAM having 12 KB available to its built-in BASIC interpreter.  A new sound and video chipset called TED was introduced offering a palette of 128 colours (in reality 121, since the system had a 16 base colors and 8 shades but black always remained black, with all 8 shades), the TED was better than the VIC chip used in the VIC-20, it still lacked  the sprite capability of the VIC-II and the advanced sound capabilities of the SID chip, both used in the C64.  The ROM resident BASIC 3.5, however, was more powerful than the VIC-20’s and C64’s BASIC 2.0, in that it had commands for sound and bit-mapped graphics (320×200 pixels), as well as simple program tracing/debugging. 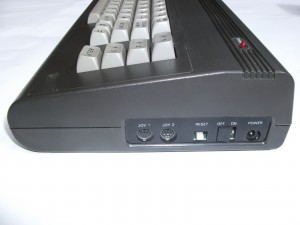 A good tip for collectors was that the joystick ports on early models are labelled Joy 0 and Joy 1 as apposed to being labelled Joy 1 and Joy 2.  The fore-mentioned are the ones to look for as they are are climbing in price and are becoming quite rare.