The Commodore Amiga 500 & the various models 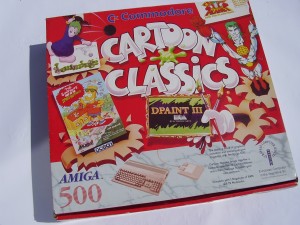 The Commodore Amiga 500 was a fantastic 16-bit computer that was just one from a large family of Amiga computers.  The Amiga 500 reached us in 1985 and basically was a cheaper version of the A1000 (the A1000 being Commodores first Amiga to be released) that was aimed at the home market.  Eventually the 500 became the leading home computer of the late 80’s and its code name was ‘Rock Lobster’.

The Amiga 500 was an important platform for games in the late 1980s and early 1990s.  Of all the 16-bit home computers, the Amiga 500 was the one to gain the greatest success as a games machine due to its graphic and sound subsystems, which were widely considered to be far ahead of their time.  A game made for the Amiga platform generally had much better sound and graphics than for example the same game running on an IBM PC, and it was also a more powerful machine than its nearest rival, the Atari ST.

I can remember being very impressed with the Amiga 500s power when they were first released and i still regularly use it to  playing fantastic retro games such as Zool, James Pond II,Pinball Dreams, Turrican II, R-Type, Jumpin Jackson (which has a sound track similar to the Rolling Stones song ‘Jumpin Jack Flash’) and many others. A personal favorite of mine was Shadow of the Beast II with the ending sequence that could have been taken from a film, something like maybe Miami Vice for example. . .

Agnus is the central chip in the design. It controls all access to chip RAM from both the central 68000 processor and the other custom chips, using a complicated priority system. Agnus includes sub-components known 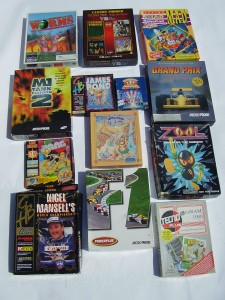 Paula I feel that the PAULA sound chip was a giant leap forward from the SID chip based within commodore 64 but i personally prefer the SID. However Paula is primarily the audio chip, with 4 independent hardware-mixed 8-bit PCM sound channels, each of which supports 65 volume levels and sample rates from roughly 20 Hz to 29 kHz.  Paula also handles interrupts and various I/O functions including the floppy disk drive, the serial port, and analog joysticks.

Gary controls access to the bus, as well as the diskette reader.  The Gary custom chip has been upgraded over time- the A3000 implemented Fat Gary and, among others functions the A4000 implementation manages the IDE port.

In 1990 the  A500+ was released.  This machine was a European-only model.  It also included Workbench 2.0 and a different graphics mode (ECS – Enhanced Chip Set).  Unfortunately, the A500+ didn’t get the attention that Commodore had hoped for, and didn’t offer much over the Amiga 500.

The Amiga series of computers found a place in early computer graphic design and television presentation.  Below are some examples of notable uses and users:

In addition, many other celebrities and notable individuals have made use of the Amiga:

He also created an image of  Blondie  at a seminar using the Amiga with Blondie doing a pose. 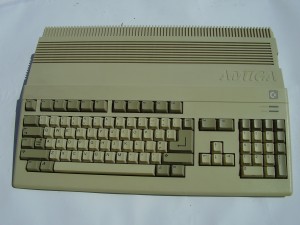 Here we have a television commercial hosting a few famous people to promote the Amiga 500.

I adore the Amiga and its amazing versitallity whether it is playing games, watching or making demos to creating a piece of artwork on a graghics program it really is an outstanding machine.

I clearly remember purchasing  my Amiga from a local store in St.Helens when they first hit the shops with a price tag of £359.90.  I still have the receipt for my Amiga 500 for a whopping £500.00 (although this including the memory expansion and an external disk drive) and in my eyes it was£500.00 of my hard earned money well spent. . .

1 thought on “The Commodore Amiga 500 & the various models”