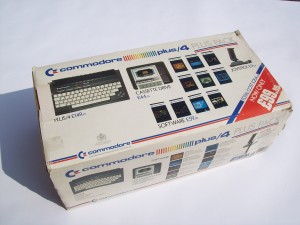 The Commodore Plus/4 was released in June 1984 and was to become Commodore’s new flagship replacing the Commodore 64.

Originally the Plus/4 was called the Commodore 264 during the prototype stage, and at least one unit bearing the 264 nameplate (without the intergrated software) is believed to be owned by a hardware collector.

Unfortunately the plus/4 was not finished but was in final buildstage when Jack Tremmel left Commodore to go to Atari. The engineers who took over when Jack left, unfortunately made a bit of a mess of things. . .  In the US it was known as the Commodore Minus/60 as a pun on the difference between the Plus/4 and the dominant Commodore 64.  I think the best way sum this computer up, is to compare the two machines.

Here we have yet another fantastic television commercial but would it make you think  ‘Mmmm, I must buy myself a Commodore Plus/4’ . . .

Features over the Commodore 64:

Features over the Plus/4:

The plus/4 was discontinued in 1985 having only run for a year. It is not completely clear whether Commodore’s intent was to eventually totally replace the C64 with the Plus/4, or whether they wanted to attempt to expand the home computer market and sell the Plus/4 to users who were more interested in serious applications other than gaming. However, the Plus/4 succeeded at neither of these and like a setting sun, it soon disappeared.