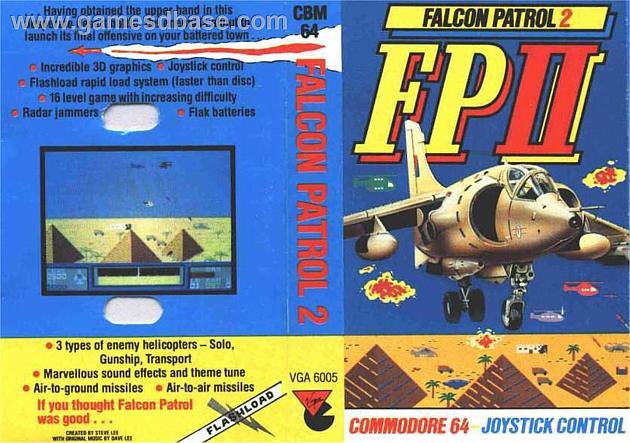 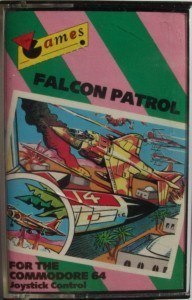 I can clearly remember this game as it was one of the first games I played when I got my Commodore 64 many years ago.  This cracking little game was written by Steve Lee for Virgin Games and released in 1983.  Sharp graphics with some great sound effects really made this game whey back then.

As the last survivor of Falcon Patrol, your mission is to protect the Oil Installations and re-fuelling bases.  You pilot a VTOL Jet that is armed with 100 anti-aircraft missiles and a sophisticated radar.  This radar shows your refuelling and re-arming bases and any enemy aircraft (their direction and altitude).

To re-fuel and re-arm you must land vertically on one of your bases.  Upon landing a re-fuelling warning signal will sound and be visually confirmed along with the reloading of your missiles on your control panel.

As you fly you craft over buildings palm trees in a desert like environment, jet fighters will attack you from all angles and I’m pretty sure that some are Kamikaze pilots so you need to be alert!

In 1994 Steve wrote and released Falcon Patrol 2 on the Commodore 64 and in 1985 it was also released on the Sinclair Spectrum.

This version was very similar to the first instalment but subtle differences were made.  Your aircraft now has the ability to fire rockets towards the ground as well as horizontally making fly by shooting a little easier.  I also like when you land your craft to re-fuel, just before your VTOL Jet lands on the pad, dust is spread by the landing jets for that bit of realism, nice touch.  The scenery has been changed slightly so it has an Egyptian theme featuring pyramids, more palm trees and the building look a bit more chard than Falcon Patrol 1 as though the fight from the first game had never ended.

The main difference however was in the gameplay, you now have to destroy a set number of enemy helicopters instead of fighter Jets in order to clear a level. The helicopters come in three forms

Transport an unarmed transport helicopter that lays missile turrets and radar interference devices on the ground.

Gunship escorts the transport helicopters and shoots at your fighter.

Solo a fast combat helicopter that goes right after your fighter.

Here is quite a rare remake of the game.  This was created as a tribute to the original and I must admit they’ve done a pretty good job.