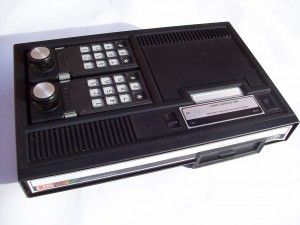 The ColecoVision has to be one of the greatest gaming consoles made.  It is up there in my top ten mainly due to a number of classic games that were ported to the system.  I can clearly remember thinking at the time that the ColecoVision was quite a powerful machine and it really was like playing arcade games with arcade graphics and sound on a console.

Released to us in August 1982, the ColecoVision was to be ‘Coleco Industries‘ first gaming console made from the second generation of home video gaming systems.

The system was initially released with the game Donkey Kong and a cataloge of twelve launch titles, with an additional ten games announced for 1982, approximately 145 titles in total were published as ROM cartridges for the system between 1982 and 1984. 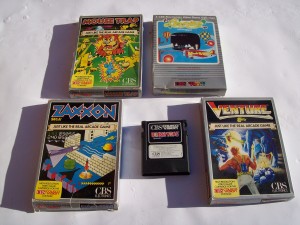 The system came about due to the owner of coleco industries, Mel Gershman.  In the Seventies, coleco had mainly been producing a range of both childrens games, toys and electronic games (remember the Cabbage Patch Kids lol).

With the video gaming market thriving and vasts amounts of money to be made, greshman desperately wanted a piece of the action by coleco creating a competitive video games console of their own.

It wasn’t until a brief interview with a bright chap called Eric Bromley that things started to happen. Bromley had some great ideas and plenty of vision (pardon the pun) as he was initially an engineer that had worked within various coin-op firms, namely Midway. Mel Gershmans wishes had been finally answered, bromley was offered a job at coleco and was to work long side colecos CEO, Arnold Greenberg.

During the design of the colecovision, the cost of RAM was extremely costly and this factor nearly caused the colecovision not to go into production.  It wasn’t until 1981 when RAM costs dramatically dropped, that allowed costings for the colecovision to come within budget and only then was it viable to start producing the colecovision.  The system was then to be distributed by a company called CBS Electronics and outside of the United States, it was branded as the more commonly known ‘CBS ColecoVision’. 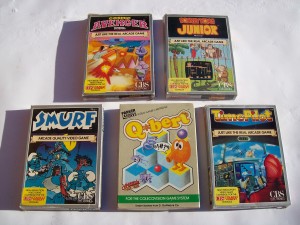 Some of the colecovisions internals were based around a Texas Instruments chips.   The video &  graphics chip was basically the same as the MSX and Sega SG-1000/SC-3000.  It also shared a sound chip with Sega consoles (including the Master System), making them identical in hardware capabilities.  The MSX contains a different sound chip that is very similar in capabilities, the General Instruments AY-3-8910.  For this reason it is very easy to port games between the three systems.

A clone of the colecovision and the Sega SG-1000 was also made called the ‘Dina 2-in-1, and produced in Taiwan.  The system was cartridge based for both formats, but the numerical keypad of the colecovisions controller was installed on the dina console itself.

From its introduction, coleco had produced hardware add-ons like the following.

Expansion Module 1 –   which made the colecovision compatible with the industry-leading Atari 2600.  Functionally, this gave the colecovision the largest software library of any console of its day.  The expansion module prompted legal action from Atari, but Atari was unable to stop sales of the module because the 2600 could be reproduced with standard parts.  Coleco was also able to design and market the Gemini game system which was an exact clone of the 2600, but this combined joystick/paddle controllers.

Expansion Module 3 –   the final hardware expansion module, was released in the summer of 1983.  Module 3 converts the colecovision into a full-fledged computer known as the Coleco Adam, complete with keyboard and digital data pack (DDP) cassette drives.  Module 3 was originally conceived to be the colecovision Super Game Module using game wafers as the storage medium.  Although coleco presented a mock-up of the SGM at the 1983 New York Toy Show,  due to the system being plagued with defects the coleco adam was discontinued in 1984.  There were rumors that the Expansion Module 3 was to have incorporated an RCA CED player to store larger amounts of data.  It was also reported that coleco actually lost $80 million on the colecovision Adam . . .

Unfortunately it was in 1983 when things started to go wrong, the infamous video-games crash put the company on a slippery slope to bankruptcy but the likes of Nintendo battled on managing to keep its head above water.   Sadly, it was to end with Nintendo succeeding were coleco unfortunately could not.

In 2009, IGN named the colecovision their 12th best video game console ever, out of a pole of 25.  I personally would have liked to seen what could have been produced and maybe what path would have been taken if Coleco had battled it out and carried on in the gaming industry.

If anything, to think of a company that once started life in Conneticut as a Leather Company, went on an amazing industrial roller coaster ride and finally left us with the Fantastic Colecovision console . . .