Well, what can i say, this is t 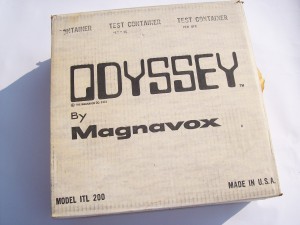 he big one.  I  believe the Odyssey to be the Holy Grail of retro gaming systems as I hope many of you will agree and has got to be a must for any serious collector.   The Magnavox Odyssey or Magnavox Odyssey ITL200 to use its proper title was the world’s first home video game console.  This console has to be the cream of my collection or should I say consoles due to me being lucky enough to source a run 1 and a run 2 model.  I will explain these differences further into the post.

The Magnavox Odyssey was the brainchild of  Ralph Baer who had started designing the system around 1966.  It was over the next two years due to Ralphs commitment, perceveirance and determination, he eventually had a working prototype that was finally finished in 1968.

The system was then first demonstrated on May 24, 1972 and later released in August of that year, predating the Atari Pong home consoles by some three years. 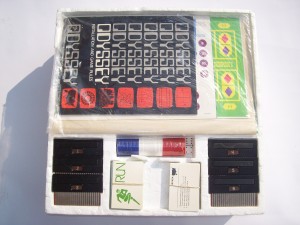 The magnavox was a pretty basic machine with simple components, it was so simple that it even run batteries.  As for the game play that was also quite basic as well.

A standard system came boxed with six diferent game cartridges and a wide range of accessories that was used with different games. Dice, screen overlays, game money and a assortment of casino type chips could be used depending on the game you wanted to play.  A game cartridge would be inserted into the front of the console and a plastic screen overlay would also be placed upon the tv screen.  A role play character i.e. the dot on the screen could be move around to simulate the character moving through a house or through a maze etc depending what was on the plastic screen overlay.

Getting a bit deeper, basically the electronic signals that are exchanged between the various parts (ball and players generators, sync generators, diodematrix, etc.) are binary.  The games and logic itself are implemented in DTL (Diode Transistor Logic), cartridge)) a common pre-TTL (Transistor Transistor Logic), digital design component using discrete transistors and diodes. 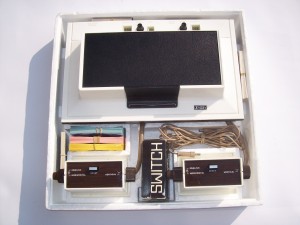 bility,  although the sound capability was corrected with the “Pong systems” of several years later.  This  including Magnavox’s own Odyssey-labeled Pong consoles.  Ralph did  proposed a sound extension for the  Magnavox in 1973, but the idea was unfortunately rejected.

The first prototype created by Ralph was most commonly referred to as the Brown Box and this unit is currently on display at the Smithsonian Institution’s National Museum of AmericanHistory in Washington, D.C.

During the life span of the Magnavox Odyssey ITL200. Although there was only two models manufactured, there was five different variations of the magnavox odyssey produced.  They were known as RUN 1 & RUN 2 respectivly and were produced between 1972 and 1975 with only subtle differences.  Prices for these systems are rapidly on the up with a graded system by VGA ( Video Game Association) on ebay (03/01/2015) for the sum of £14,686.74. 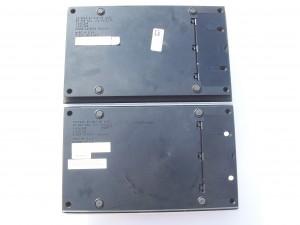 Here are a fewMilestones by Ralph Baer:

1922 Ralph Baer was born in Pirmasens, Gremany on March 8.

1958 At the Brookhaven National Laboratories, William Higinbottom invented a computer type of

1968 Ralph Baer had completed a working prototype of the ‘Brown Box’.

1971 Ralph Baer files a patent application for his TV gaming technology on March 22.

1972 Magnavox finally licences the brown box under the name of Magnavox Odyssey. 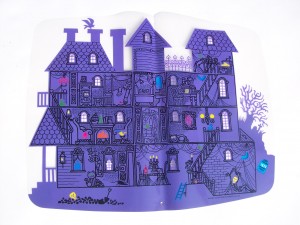 2004 Ralph Baer is finally awarded ‘The National Medal of Technology’ for his achievements.

Some other historical facts  are that magnavox settled a court case against Atari, Inc. for patent infringement in Atari’s design of Pong, as it resembled the tennis game for the Odyssey.  Over the next decade, Magnavox sued other big companies such as Coleco, Mattel, Seeburg, Activision and either won or settled every suit outside court.

Ralph Baer also designed a golf type putting game, which used a golf ball fixed to the top of a joystick which the player would hit using a putter.  This idea interested Magnavox, and fortunately took the prototype for further testing.  The game was initially planned to be r 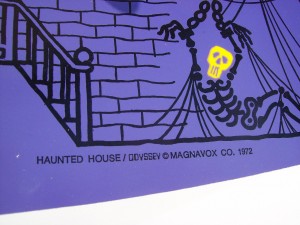 eleased as an add-on but ultimately it was never released.

Recently, Baer replicated his active cards and putting game this can be seen in the Museum of the Moving Images in New York.

The Odyssey was also designed to support an add-on peripheral, the first-ever commercial video ‘Light Gun’ called the Shooting Gallery.  This detected light from the TV screen, though pointing the gun at a nearby light bulb also registered as a “hit”.

What I find quite fascinating is a television commercial that was made featuring old “Blue Eyes”, Frank Sinatra, helped spark up sales in the fall.  Not surprisingly, close to one hundred thousand Odyssey’s were sold that season.  But by early 1973, Odyssey games were already being discounted.. Foreign sales took up some of the slack.

For you retro gamers out here, this is where I think things get a little bit interesting (trying not to sound to geeky).  Considering the history behind this system, namely that it was the first ever games machine produced, similar versions or what is more commonly known as clones of the Magnavox ITL220 were produced.

The overkals main unit looked similar as did the controllers, the system was also battery powered.  Some of the main differences however were that instead of having a cartridge slot and cartridges to play various games, the overkal had a set of six buttons on the front of the unit to select the games, although there were 6 buttons it was possible to play seven games but that was all.  These games were Tennis, Football, Ski, Submarine, Cat & Mouse, Analogic, Roulette and Table Tennis.

Similar to the ITL200, seven different screen overlays in two different sizes were provided to enhance the game play although any text on them was written in Spanish.  The rifle that was later released for the ITL200 was not a feature on the overkal.  I think that the rifle was only released just before the overkal was released making it a little late to include.

The two controllers on the overkal were hardwired as appose to being able to plug them in or remove them on the ITL200.  Many say this this is a better feature due to inferior soldered joints but I have to disagree as I have never had a problem with either of my two systems.

My personal dislike is that after going to the trouble of cloning the ITL200 and removing the cartridge feature it would have been relatively easy and more cost effective to rework the internal motherboard.  On the ITL200 daughter boards and jumpers were initially used.  In the overkal the motherboard was slightly reworked using improved circuit board drawings, better connectors and fewer jumpers. It would have been easier to just use one main board with no jumpers.

The other version that i am aware of was released in Argentina called the Telematch de Panoramic.  This version looked quite different with the main unit being built into a carry case.  This version was powered by a mains supply only and featured just five simple games, these were Submarine, Squash, Volleyball, Tennis and Football with goalies.  Unlike the other two this systems this version did not use any of the accessories such as the screen overlays, cards, chips or the dice.

In 2009, video game website IGN named the Odyssey in the Top 25 video game consoles of all time.

For those of you like myself who enjoy the Retro Video gaming i’m probably just over half way through my journey of writing and displaying my gaming consoles i have collated over a long period of time, although there are still some classic and favorites i have held back.  I might be tempted also to give you an insight and write about some of the legendary programmers such as Jeff Minter from Llamasoft,  Ian Grey from Interceptor software and Rob Hubbard the legendary musical wizard whom wrote classic tracks like Monty on the run for the Commodore 64 along with many others if i get a good response. . .  Please feel free to let me know.

6 thoughts on “The Magnavox Odyssey ITL200- The Holy Grail”