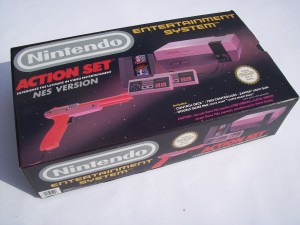 ment System or NES as it was also known was a cartridge based console that graced our stores in 1985. Later the NES was released in the US where its name was changed to Famicom (Family Computer) as Nintendo though it would suit the market better in the US.

The NES system was welcomed by many as it helped revive the market after the video gaming crash of 1983.  The system was to also set the standard for subsequent game consoles, from hand control layout through to game design. The NES  was quite powerful featuring a custom made 8-bit 6502 processor and a Picture Processing Unit (PPU). What helped was that these were developed and manufactured at low cost by a company called Ricoh. 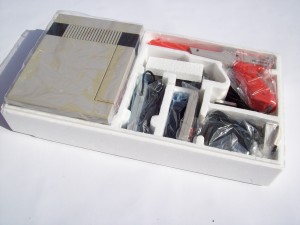 The system could handle up to 64 sprites with up to eight sprites being present on one scanline.  With a resolution display of 256 horizontal pixels by 240 vertical pixels.  Typically, games designed for NTSC-based systems had an effective resolution of only 256 by 224 pixels, as the top and bottom 8 scanlines are not visable on most television sets.

The sound for the NES came from an on-board sound chip giving a total of five sound channels.  These included two pulse wave channels of variable duty cycle (12.5%, 25%, 50% and 75%), sixteen volume levels and hardware pitch bending supporting frequencies ranging from 54 Hz to 28 kHz. 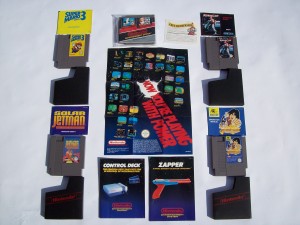 A fantastic array of games were released for the NES some being from franchises that were owned by Niniendo.  Games such as the adventure series which featured titles like The Legend of Zelda,  Zelda II – The Legend of Link,  Super Mario Bros and Metroid. There were also great sports series with titles such as Rad Racer, R.C. Pro-Am, Ice Hockey, Pro Wrestling and Golf.

Some consoles were repackaged and sold in various sets i.e The Action set. This came with a NES zapper and two cartridges,  Super Mario & Duckhunt. To support some games, controllers were produced such as:-

Some of the titles were to become unbelievably successful with titles like Super Mario Bros 3 selling over 7 million copies of the game and making over $500 million dollars in just the US alone.  This is a record that has not yet been beat and has made it the best selling game of all time ! ! !

Here is the first us television commercial shown in the US just for a bit of NES nostalgia, enjoy. . .

The only flaw i disliked with the NES was that it was made from an inferior plastic.  The plastic contained an additive (bromine) that was intended to keep the casing from catching fire if the system go hot but the problem was that the additive used, caused the light gray console plastic (including the controllers) to gradually fade towards a yellow colour and also make it brittle.  This was caused by it being exposed to UV-rays over a long period of time.  The only way to get rid of the yellowing color is to use a hydrogen peroxide solution.

To briefly sum up the Nintendo Entertainment System, it is now as it was then a fantastic console.  Nintendo could not have released the system at a better time and having sold over 19 million units, i really do think the figures speak for themselves. . .