The Sega Saturn was a 32-bit CD based video gaming console that graced our stores on 8th of July 1995 priced at $399.99 and was to be in direct competition with the likes of Sony’s Playstation and the Nintendo 64.

Unfortunately the Sega Saturn was not one of Sega’s best consoles and with the commercial failure caused Sega to lose US $267.9 million and lay off 30% of its workforce.

Despite this, by the time of the PlayStation’s release on September 9, 1995, the Saturn had sold approximately 80,000 systems.   The PlayStation sold over 100,000 units upon release in the U.S., and Sega’s dreams of early domination of the new generation of hardware were quickly drowned although in an artical in July 2007 by GamePro, the Saturn was known to have sold over 9.5 million units worldwide so it did quite well in my estimation.

I personally like the Sega Saturn purely because of the classic games that made the system.  After playing a few different versions of Sapce Harrier the Sega Saturn has to be the best as it looks and sound just like the arcade version.  Some other classics are Doom, Tomb Raider (a cult classic) and not forgetting Sega Rally Championship.  This sold 1.2 million copies and Virtua Fighter 2 sold over 2.2million copies, 1.7 million in Japan and at least 500.00 in the US. 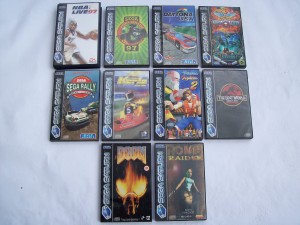 A Digital Video Cartridge is also available for the Saturn that allows video disc films to be played, a little like the Philips CD-i.  These are quite rare but do turn up from time to time on E-bay.

This is yet another console that I like to use from time to time and I do believe that if Sony had not released the Playstation when they did the Sega Saturn would have been up there with the best.