The Videosport MKII . . . A Real Rarity 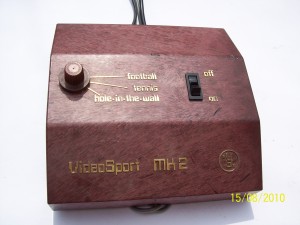 The Videosport MKII games console was an early PONG style games machine made from 1974 to 1977 by acompany called ‘Henry’s’ who was a British retailer of televisions and Hi-Fi’s.  Two versions of this console was made, the first being the more rarer version that had gold lettering and later version did not, I believe this was done purely as a cost cutting measure.

The Videosport MKII could be purchased via local retail stores of the 70’s and also via mail order, a little bit like the Sinclair ZX81.

What shines through and gives you a good feel for the age of the Videosport MKII is the good old British design and build quality.  The console was powered solely by the mains as it did not support batteries and all of these consoles were assembled by hand.  The unit itself was glued together rather than using any kind of screw fixing like most modern consoles today.  This does make for a stronger unit but also makes any repairs very difficult.

The plastic used in the production of these consoles also had strange properties.  Scars seemed to appear on the surface of the unit as though a cigarette had been allowed to burn upon it or a hot soldering iron has been dragged across the surface of it without the console being exposed to any form of heat source. . .  very strange. 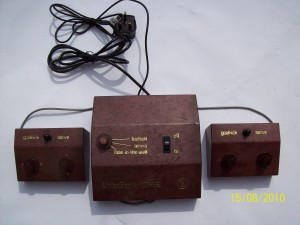 Circuitry in the Videosport MKII resembled that of the Magnavox Odyssey.  The hand assembled electronic circuit board supported two small basic TTL integrated circuits (NAND logic Gates) as-well as more common components like transistors, resistors and capacitors of the time.

The console had three built in games:  Football, Tennis (which is basicaly pong) and Hole in the wall.

The first game ‘Football’ is a bit of a rarity for an analogue console plus the fact of playing football with no players leaves a lot to the imagination. . .  The game consists of two vertical lines with a gap in the middle to create the goals and like pong it has two small lines that are controlled via the paddles to block you apponents ball.  In affect there are only two goalies playing.

The second game is ‘Tennis’ (pong).  The game play consists of a line down the middle of the screen and the Player (paddle) is moved vertically and horizontally via the two knobs on the control to hit the ball from one player to the other.

The third game is ‘Hole in The Wall’.  This is mildly similar to the football game with a line down the left hand side of the screen  with a gap in it.  The player (paddle) on the right hand side of the screen can be moved vertically and horizontally and is positioned directly opposite the gap.  When the ball is served and the Player moves up or down, the gap directly opposite also 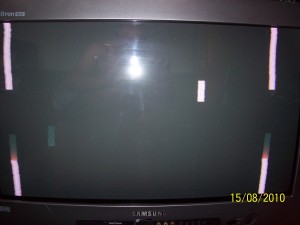 moves parallel to the player which i find a little dis-orientating.

To sum up the Videosport MKII, their was never a great volume of these consoles manufactured, probably no more than 3,000 units and to show how basic the marketing of this machine was, there were never any serial numbers or identity labels underneath the system to catalogue them during production.

The videosport MKII was never really recognised as much as other consoles of it’s era although i personally believe it did have a great significance on how early game console history was shaped, just like the Magnavox Odyssey did.  You can probably pick up a Videosport MKII console for maybe 40 to 50 quid but the only big problem you will have is, finding one . . .