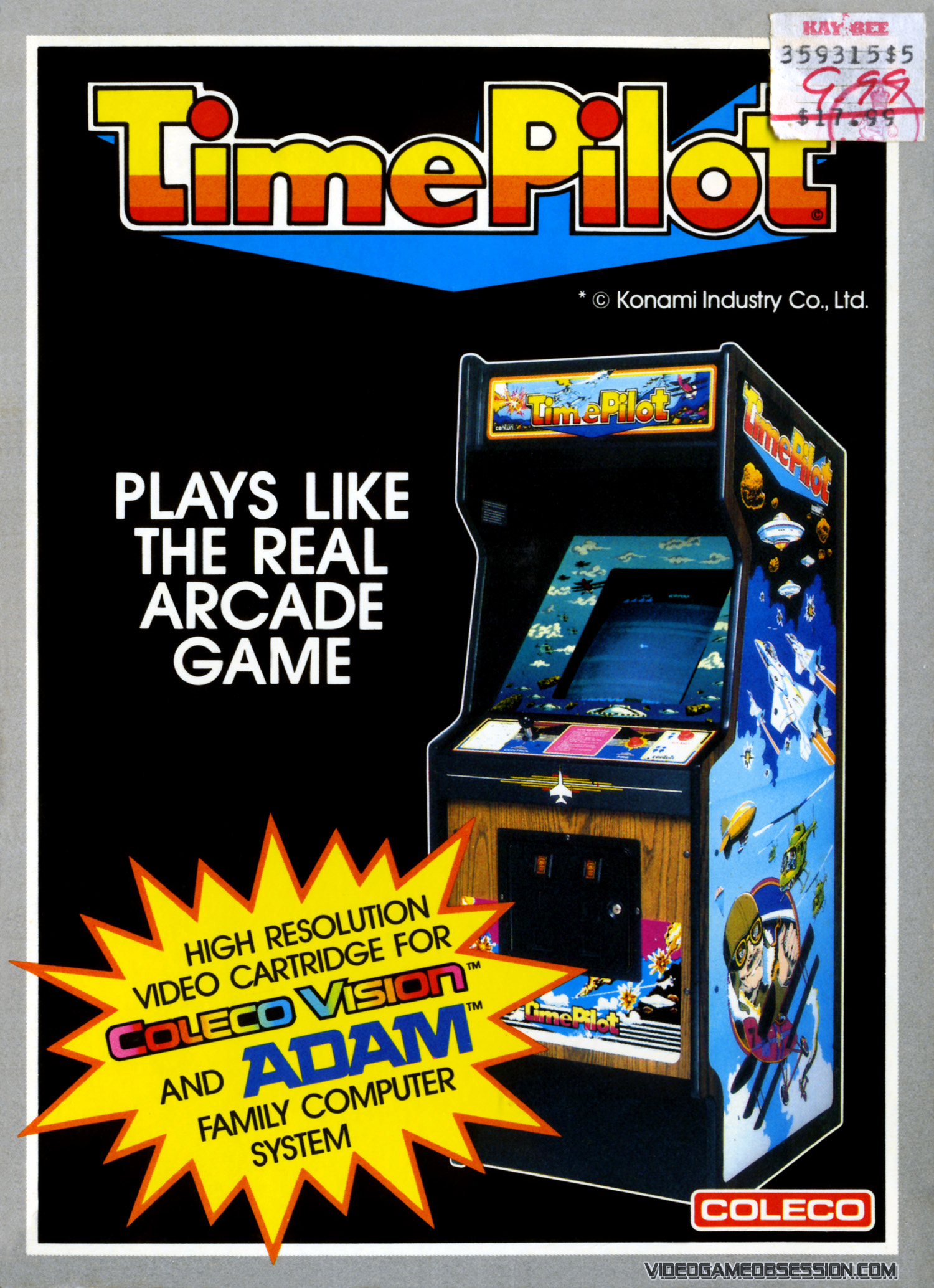 Have you ever wanted to fly an advanced plane whilst blasting an assortment of enemy aircraft through different time zones? if you have then welcome to the classic 1982 game, Time Pilot.

This muti-directional scrolling shooter arcade game was designed by Yoshiki Okamoto, released by Konami and was distributed in the United States by Centuri.

With the games success, it game was later ported to a few home consoles, namely the Atari 2600, Colecovision and the MSX, the game was also released on the BBC computer by Superior Software and the Commodore 64 by Kingsoft/Anirog.

This cracking little game places you in the cockpit of a futuristic jet fighter where you have to dogfight your way through five different time periods.  The difference with this game is that controlling your craft is a little different.

Instead of moving your plane around the screen, the plane stays central and the screen moves around you, it does take a little getting used to but it adds to the character of the game.

The first four levels they only get slightly harder as you progress, enemy ships and motherships will fire upon you, yours being white whilst the enemies being yellow and quit slow to start with.

To complete the level you must destroy 56 enemy aircraft (25 on the MSX version increasing by 5 after each game cycle) and defeat the mothership by firing upon it continuously until it is destroyed.  Once destroyed, any remaining enemy craft will also explode  and you can time-travels to the next level.

During your campaign, you can shoot down larger, slightly tougher ship and also collect friendly pilots that have been shot down and are parachuting to safety for bonus points.

In 1910, the first level, the biplanes shoot yellow bullets and can shoot fire bombs.  Bombs are initially fired upward but have acceleration in the downward direction so you will need to be on your toes with these.  This seems to be the work of gravity since the bombs follow the parabolic trajectory of a thrown object, however you can fly downward indefinitely and not reach the “ground”.

In 1940, these planes don’t possess the bombs from the previous stage but they are slightly more slimmer and harder to shoot!  Bonuses can be picked up for shooting down red-and-yellow supply planes that fly horizontally across the screen, similar to the mothership they will require multiple hits to destroy them awarding you 1500 points upon their destruction.  They pose no real treat as they cannot fire on you.

In 1970, your faced with helicopters even smaller than the previous monoplanes.  As well as the yellow bullets, they are also fitted with homing missiles, they do travel faster than you and can be shot down but it is easier to lose them as you can turn faster than they can.

In 1982 the jets are similar to the helicopters but they’re bigger and better and much more aggressive.  They’ll give you a hard time by constantly bombarding you with homing missiles over the standard yellow bullets, dodging the enemy and its flak will prove to be pretty hard.

The last of the five levels puts you in a sort of asteroid environment.  I remember on my first go trying to avoid the asteroids!  This is a tough one, surrounded by UFO’s that can hide behind the asteroids using them as camouflage whilst fast firing, spiraling bullets and pulsating missiles! I hope I haven’t put you off too much.

In 1985, Anirog released a sequel to the game called Space Pilot 2.  The game is very similar to the first with only a few noticeable differences.  Firstly is that the game has four different backgrounds and give you the feeling of flying over land as oppose to the sky.

You still get three lives but instead of having to shoot a set amount of planes to proceed forward you now have a time meter that is visible on the bottom right of the screen.  Again you have various planes to gun down but be careful as some of these attack in a formation of three and some are kamikaze pilots.

Every 30,000, you are awarded with and extra ship which you will definitely be needing.  I think the best feature is the fact that you can have up to 8 players independently, great for when a few of you get together for a shoot out.  The downside is because of a lot of detail on the screen, the game does run a little slow which is such a pity.

Overall, they are both very simple games with simple screen layouts but every once in a while when I go to the arcade club in Bury, Time Pilot is a favorite I always seek out to play.