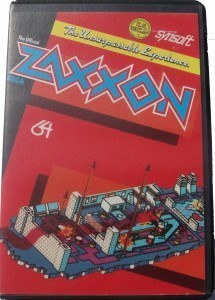 At the time of its release in 1982, Zaxxon was a very unique 3D shooter, becoming very popular worldwide with some ground breaking results.

I always think of this game as an up-dated version of the arcade game Scramble that was a two dimensional horizontally scrolling shoot-em up game released by Konami in 1981.

In the game you fly a heavily armed spacecraft across a floating fortress where your ultimate mission is to destroy the deadly Zaxxon robot.

First is an all-out attack destroying gun emplacements and radar towers, you then have to carefully avoid force field barriers, missiles and anti-aircraft fire.  Its then onto a deep-space dogfight with waves of enemy fighters before you finally reach ZAXXON and it’s lethal homing missiles.

Zaxxon was one of the first video games to display shadows, to indicate the ship’s altitude above the surface.  In the game the altitude meter was used to allowing the player to control how high or low the ship is above the surface, this was essential to destroy the missiles and flying through small gaps within walls in the game.

In 2012, Zaxxon was included for exhibits of ‘The Art of Video Games’, at an upcoming exhibition for Smithsonian and Paramount Pictures produced their first arcade game commercial costing $150,000 to advertise Zaxxon on television.

Due to the games amazing success, Milton Bradley started making board games of successful video games and Zaxxon was just one of many made in 1982.

Released by U.S. Gold/Synsoft, Zaxxon was ported to almost all home computer and video game console systems between 1982 and 1985.

Unauthorized adaptations of the game were published for the Amstrad CPC known as Zaxx, BBC Micro known as Fortress,  TI 99/4A known as Arcturus.

Zaxxon is now also available in an unlockable selection of arcade games in ‘Sonic’s Ultimate Genesis Collection’ for the PS3 & Xbox 360.

The Atari 2600 and Intellivision ports were noticeably different because they used a 3rd person, behind the ship 3D perspective instead of the isometric graphics of the other versions. This was due to the technical limitations of these consoles.  Zaxxon 3-D was released for the Sega Master System in 1987 was quite good with the console making use of its 3-D glasses add-on for extra depth perception.

In 2006, Zaxxon games were included as bonus game on the Sega Genesis Collection for Sony’s PlayStation 2 and PSP consoles.  The original Zaxxon is the game included on the PS2, and Super Zaxxon is the one available on the PSP.  Zaxxon was also included as an unlockable arcade game in Sonic’s Ultimate Genesis Collection for the Xbox 360 and PlayStation 3.  I believe a bootleg version of the game was released in the arcades in 1982, this was called Jackson.

There is a world record for this game that I don’t think will ever be beat that is 4,680,740 points scored by Vernon Kalanikaus of Lā’ie, Hawai’i, on March 15, 1982, according to the Twin Galaxies Intergalactic Scoreboard.