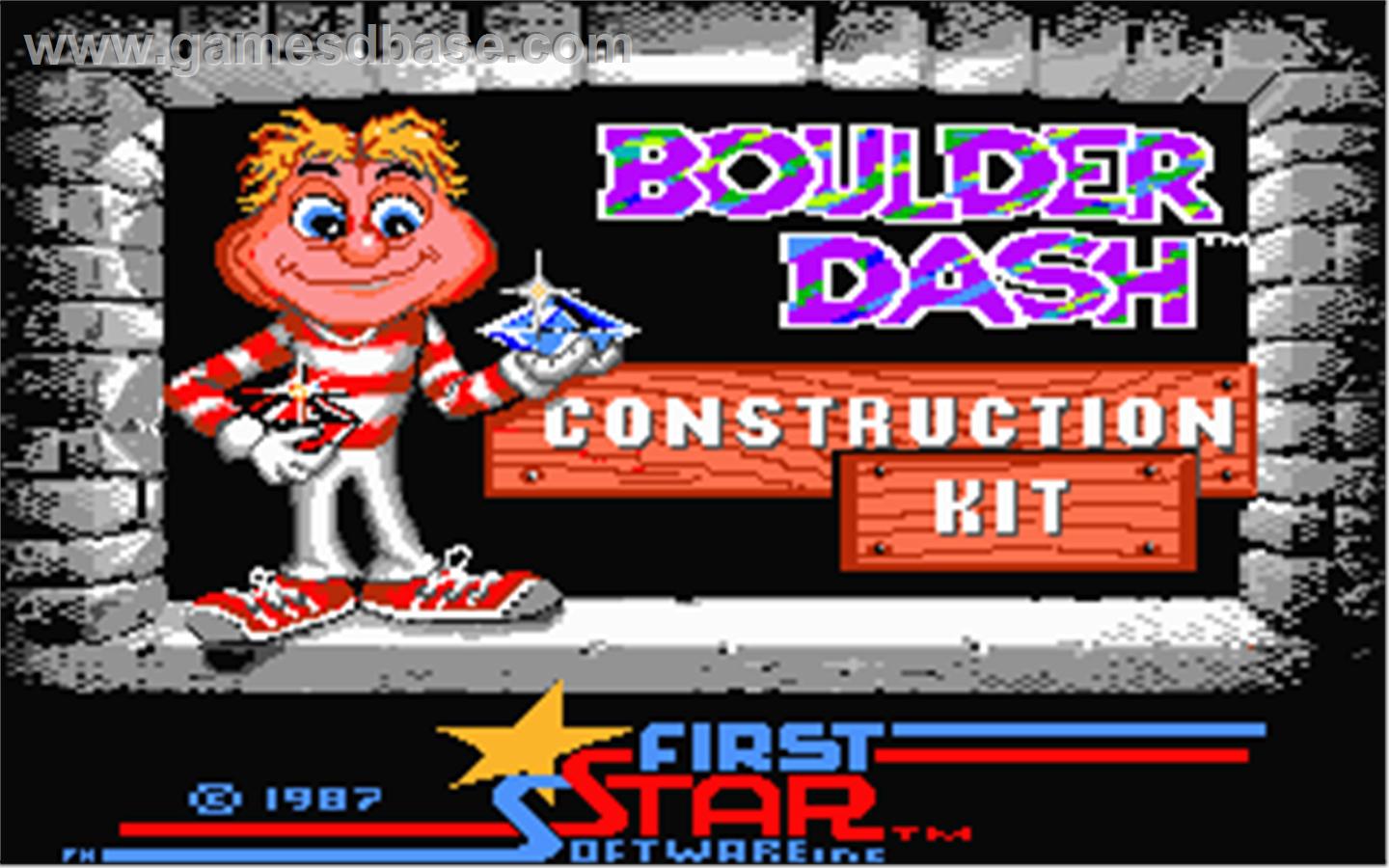 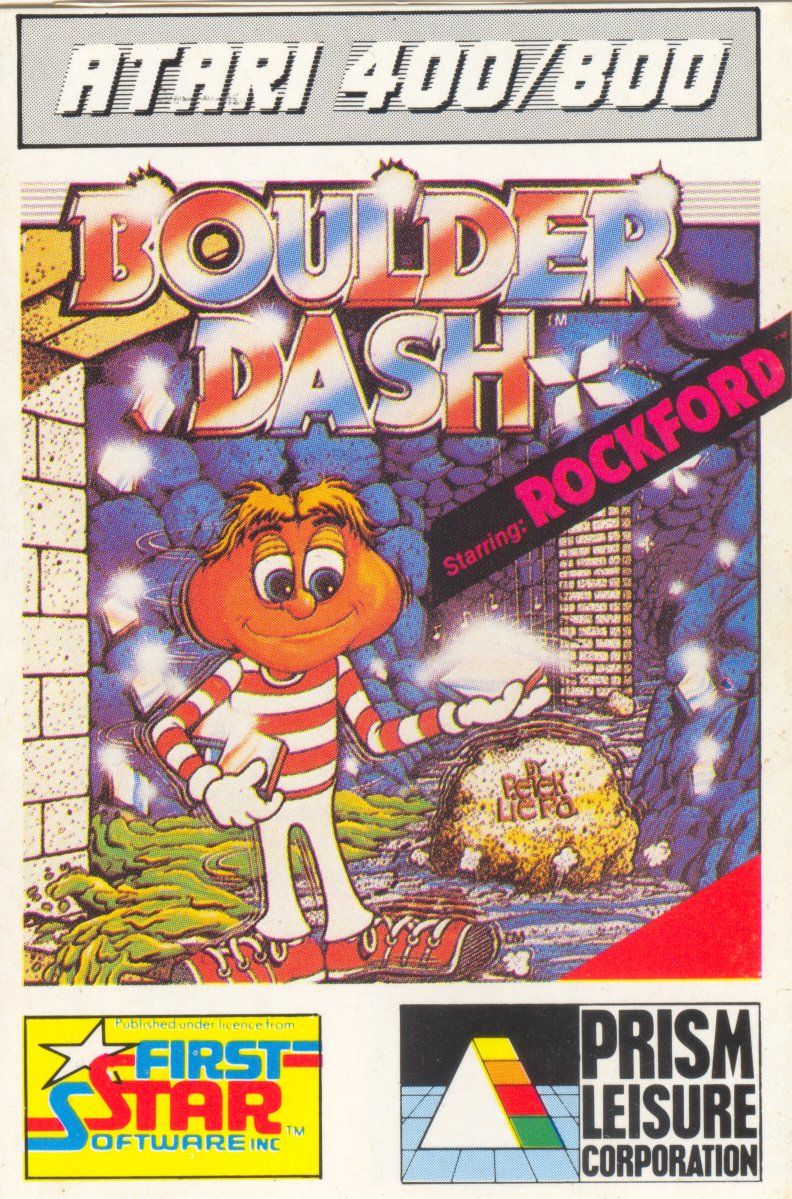 Every now and then when I’m searching through my disks for something to play, Boulder Dash always makes an appearance.  With a classic blinking & foot tapping character by the name of Rockford, Boulder Dash still is one of those games that keeps you coming back for more!

Created by two Canadian programmer’s, Chris Grey and Peter Liepa and published by First-Star Software, Boulder Dash has become one of the longest ever, running franchises.

Chris’s inspiration for the game started in 1982 at the age of fourteen with an Atari 2600, he later up-graded to an Atari 800 home computer where he spent the next year or so messing around with gameplay mechanics and how to write games based on what he played or inspired him, such as Universal’s Mr Do! and Namco’s Dig Dug.

It was a game called ‘The Pit’ that really caught Chris’s attention, giving him the idea to create a game involving rocks in some kind of way.  He wanted the rocks to be more than just a background image and wanted them to play a major a role within the game so started by writing algorithms to make the rocks shake, roll and even fall.

Chris regularly visited a store in Toronto called called ‘Electronic Playworld’ where he could keep upto date with the latest games, he’d also, like many of us, spend quite a lot of time in the arcades.

Over a period of time he got to know the owners and was surprised to find they also ran a company in house called ‘Inhome Software’.  It was here where Chris met Peter, who had also approched them about creating a game.  Peter was twice Chris’s age, was a maths graduate and had something that would be an advantage to the game, an interest in physics.  Having discussed his idea between them, it only took a couple of days to roughly lay down the basic’s of what was to become Boulder Dash.

The way forward was to convert the software chris had started from BASIC to assembly language that would allow him to create more elaborate algorithm’s and even introduce the idea of scrolling the screen within the game.  A random number generator was created to generate the random cave formations and could also be used to randomly incorprate the dirt, rocks and diamonds enriching the game. The  actual puzzle of finding your way through the caves was naturally generated.

Other aspects of the game that really added to the game was the way you could grab, push and dig from a stationary position which made collecting the diamonds and jems a lot easier.  Funneling rocks through magic walls would change them into diamonds, boulders falling onto fireflies could blast through barriers unleashing swarms of butterflies on an expanding ameoba, creating a chain-reaction of explosively incarnated diamonds.

With the release of the Atari version the games success started rapidly growing, magazines also contributed to this.  Personal Computer named it ‘Game of the Year’, Computer Entertainer anmed it ‘Atari Computer Program of the year’, Family Computing named it ‘Arcade game of the year’ and Zzap magazine actually adopted the Rockford as their mascot where he would ramdomly appear in page margins throughout the magazine.

Boulder Dash was quickly ported from the Atari to other systems like the Commodore 64 and the Apple II become hugely successful in Europe and Japan.

Boulder Dash II, the sequel called Rockford’s Revenge was later created.  The layout of the game looked very similar to the first, with little effort, new elements were incorperated such as walls that expanded horizontally when the earth was dug out around them and blue slime that slowed falling rocks and diamonds for a short time.

Boulder Dash III however was passed onto a Swedish company by the name of ‘American Action’, this was mainly because they gave them a rotyalty advance in exchange for letting them release the game, but in all honesty this turned out to be a bit of a mistake.  American Actions next installment was to have ‘space’-themed visuals, it was said that game was plagued with bugs and some levels were impossible to complete, it was obviously rushed in order to get it in the shops.

This rather poor decision didn’t cause too much damage and First Star recovered with the introduction of Boulder Dash – Construction Kit.  There were concerns, giving fans an editor in which to create their own games but back then it wasn’t very easy for gamers to exchange cave levels that they had created. Boulder Dash kept going from strenght to strength.

In gaming history Boulder Dash was I suppose really the first game to be so successful on home computers, a company called Exidy actually housed Atari computers inside cabinets and introduced them to the arcades!  A Commodore Amiga was even known to be fitted inside a cabinet for the arcades also.  This was the first time in gamiong history that a game had been ported from a videogame console to an Arcade cabinet!

It wasn’t long before other software companies started jumping on board, Dataeast released two real arcade game version and went on to release the game  on the NES (Nindendo Entertainment System) in Japan.  JVC publishing made versions for the NES and Gameboy released in North America and Tecmo’s version was on the Game Boy Advance.

In 2002 the game was modernized with tools being added to the game play such as a magic hammer to smash boulders and the ability to kick boulders over long distances enabling the played to kill enemies.  Boulder dash EX added similar tools such as ray-guns, dynamite and a telescopic arm.

In Boulder Dash Treasure Pleasure & Boulder Dash Pirates Quest it was noted that the names on the leaderboards were namely women so one of the biggest changes to the game was to introduce  a female charactor called Crystal, quite fitting really!

To think 30 years later the game was still running. They left us with versions on select game consoles, iOS, Android, followed by PC & Mac.  Boulder Dash XL on hte Xbox 360 looked stunning!  Still keeping the original feel of the game, the graphics beautifully lifts it up and keeps it fresh. A personal favorite of mine has the be the introduction of the Atari 2600 version and a planned release on the Intelivision.

No matter which version you play, its a game that will always be with us and quite rightly so!

The official Boulder Dash games started in 1984 with the original home computer title, and continue to be published by First Star.

A few clones were made such as Repton on the BBC, Rock Man on the Vic wasn’t to bad as it was un-expanded (3.5k game) but played pretty well.