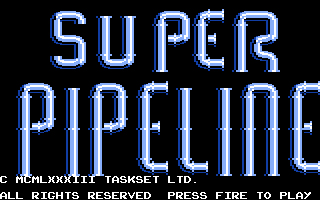 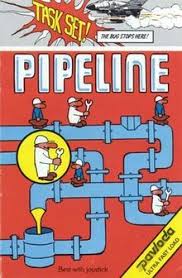 Who would have thought a spot of plumbing could be such fun!  For me, it normally ends up with a house full of water and a very large insurance claim!  I just hope they aren’t reading this.

Released in 1983 by Taskset, Super Pipeline was a very different kind of action, puzzle game, its pretty funny and has a very catchy soundtrack.  Your role is as a Foreman armed with a gun, and with you is your trusty workman.  Your job is to keep the pipeline free from blockages allowing the water to flow freely.

The pipeline will start filling up and flowing round the bends till it reaches the bottom of the screen to fill a waiting barrel.  Once the score reaches 1000, the barrel is full and the level is complete.

As you progress through the game, this number will rise, on level fifteen for example, you will have to reach 9000 before the barrel is full and the level is over.

To make your job a little harder, to your left is a ladder, this is where the infamous, evil ladder man and a series of bugs will try to climb past you to the top of the ladder and onto a platform.  If you do not shoot these down, the bugs will scurry across a platform at the top of the screen and drop onto the pipeline, chasing you around and trying to kill you.

The ladderman is a bit more of a nightmare!  If he gets to the top of the ladder, he will run across & drop one of several plugs located on the platform.  If this happens, once the water reaches the plug, the flow of water will stop until the workman unplugs the pipe, this can be done by the workman running over the plug.

As the levels progress, you will also encounter walls that protect the ladder and the climbing assassins.  The game will also speed up so i hope you have a pretty strong controller as it will take a bit of bashing!

You can shoot these whilst they are climbing the ladder but if they drop onto the pipeline, the best way to kill them is to have the workman in front of you or behind you depending on which way the bug or Lobster is coming at you.  This brave little fella will take the bug out by grabbing it and jumping to his death, saving you, what a guy!

Don’t worry to much about him as a replacement workman will appear on start of the pipeline, the only problem is he will stay there until you walk up to collect him, only then will he follow you again.

The only way to re-open the pipeline is to walk over the plug with the workman who closely follows you.  He will hammer out the plug and the flow of water will commence.

If your job wasn’t hard enough, after a short period of time on each level, a short, devilish tune will play and a rather large rouge looking Lobster will appear on the screen to cause even more mayhem.

Throughout my many years of work, I’ve never, ever come across any lobsters on any of the pipeline’s I’ve had the privilege to work on!  This little crustacean is as tough as a pair of roofers gloves!  He’s bullet proof from the front but can be shot from behind to be killed.

Created by Paul Hodgson, i like how each level starts with a clip of the music from Laurel & Hardy, this then settles into a different in game track.  Four different tracks are played throughout the game.  After every two levels there is an intermission animation play, similar to that in Pacman.

The guys made a return visit in 1985 with a sequel to the game, funnily enough, they called it called Super Pipeline 2!  They kept the guidelines of the original game, only making subtle changes.

In this version, at the top of the screen, the water now flows from a dispensing tank to the empty barrel, and you can now see it being filled.  The further you progressed through the game, more barrels are required to be filled before progressing to the next level.

There is a fixed capacity of water in the dispenser tank.  If the water runs low, the pipe will flash, the sound effects will pulse a distress signal and the player’s score will decrease until it reaches zero, all of the water is wasted or all of the barrels have been filled.

The game also had a number of different enemies to look out for.  As you go through the levels, you will encounter drills, jack hammers, plungers, wielding spanners, blow torches, garden spades, circular saws and to top it off, a wall of flying nails so you’ll need your wits about you!  The bugs are still present but they’re accompanied by caterpillars and lets not forget the trusty Lobster!

The game now a cut scene for the end of every level, my favorite is the Foreman running across the bottom of the screen followed by two workman, a rather jingly should we say woman is running the opposite way past them.  Needles to say the last workman turns round and runs after her.

All in all, its a pretty good, playable game.  A re-make of the game with a similar name ‘Super Pipeline Redux’ was in the pipeline (pardon the pun) in 2012 but sadly, i don’t think anything became of it.

I’m quite surprised the game never made it to other consoles or computers with the exception of the Super Pipeline II to the Sinclair ZX Spectrum and Amstrad.