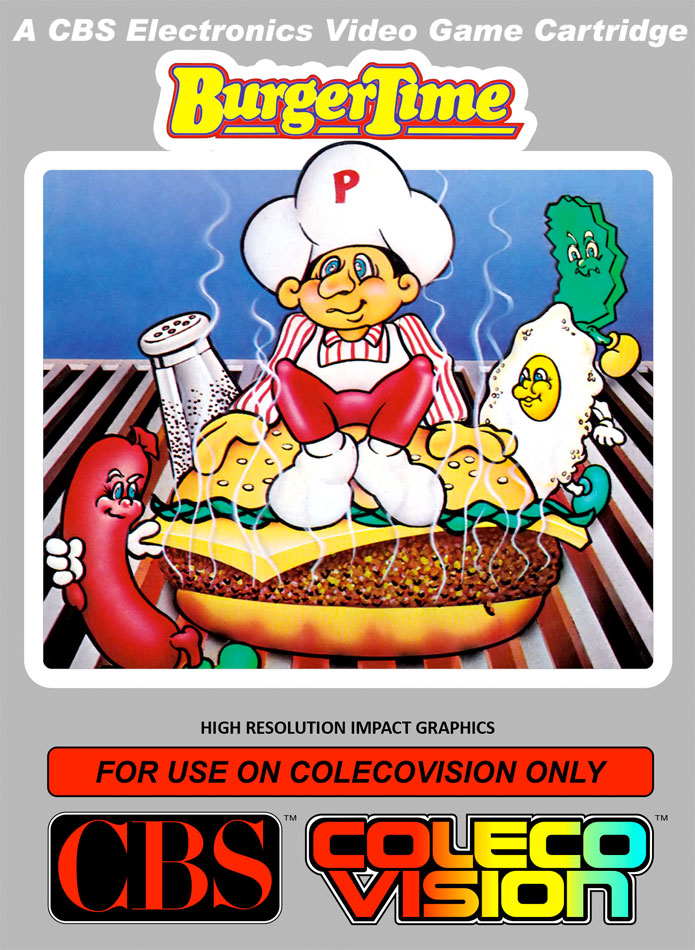 Who ever thought making a burger could be so much fun!  Created by Data East/Bally Midway, BurgerTime was released on 31st August 1982.

In the game, you control the burger tosser Peter Pepper who’s goal it is to negotiate a maze of platforms & ladders trying to walk over various ingredients (not very hygienic) to create four pretty big mouth watering burgers.

Burger Time contains six increasingly difficult levels with more burgers to complete and more enemies to deal with!  Each level gets just that little more complicated to negotiate making it easier for Pete to get cornered and harder for him the reach the burger ingredients.  After all six levels are complete, you return back to the first one.

You start the game with the bottom of a bap (as i’m going to call them) at the bottom of the screen on a plate.  Guiding Pete around the the screen whilst running over lettuce, burgers, cheese and tomatoes etc drops them down each level. Once they’re each topped off with the top of the baps, the level is completed.

Sounds easy hey! during the game however, you are constantly chase by some other angry enemies like Mr. Hot Dog, Mr. Pickle, and Mr. Egg.  This may sound a little harder but at Pete’s disposal is a pretty strong pepper shots that once used, will pause the nasties for a few seconds allowing Pete to slip past them and crack on with the job in hand.  These can be seen on the top of the screen so use them wisely!

These menacing meanies can also be brought to a timely death with Pete louring them to a lower level, running over a burger ingredient above, causing it to drop and squash the enemy below.  The more enemies squashed in one hit, the more point your awarded!

Extra shots are obtained by collecting bonus foods, such as coffee, an ice cream cone, or French fries, which appear in the center of the maze when a certain number of ingredients have dropped.

BurgerTime was eventually ported to several other home computers and consoles: Apple II, Atari 2600, BBC Micro, ColecoVision, MS-DOS, Mattel Aquarius, MSX, NES, and TI-99/4A.  The Intellivision port was reportedly Mattel‘s most-popular game for the console.  The game has been included in various retrogaming packages and platforms, including Midway Arcade Greatest Hits Volume 2 for the PlayStation and the Data East Arcade Classics for the Wii.

Most notably was the conversion for the Commodore 64 & ZX Spectrum called Mr Wimpy, in honour of the mascot of Wimpy restaurants.  Birmingham residents will also note the connection with late night fast food restaurant “Mr Egg”, which presumably was named in honour of this great game.

Other variations of this game were later made such as Beef Drop on the Atari 7800, Burger Chase by Supersoft, The Great Burger Riot by Nation Software on the Commodore 64, Whopper Chase on the ZX Spectrum.  I think I would have gone for the double whopper with that one. 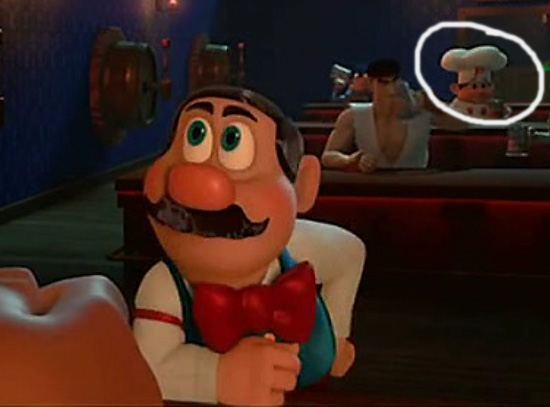 According to Twin Galaxies, he improved it further to 11,512,500 points on September 19, 2008 at the Challenge Arcade in Wyomissing, Pennsylvania.

The MAME world record was verified by Twin Galaxies on December 2, 2016 as 7,837,750 by Roger Edwin Blair III of Mountain City, Tennessee.

Peter Pepper finally hit it big time when he hit the movies in Wreck-It Ralph 2012 and the most recent being Pixels in 2015.  Before that, elements from BurgerTime along with a mention was cameoed in an episode of Captain N: The Game Master in the episode for Season 2 titled GameBoy.

Mr. Egg made a brief appearance in the episode of the animated series Futurama “Anthology of Interest II“.

A couple of re-makes are also available, one being shown at E3 back in 2011,

It just goes to show how some of these classic arcade games can live on after all these years!