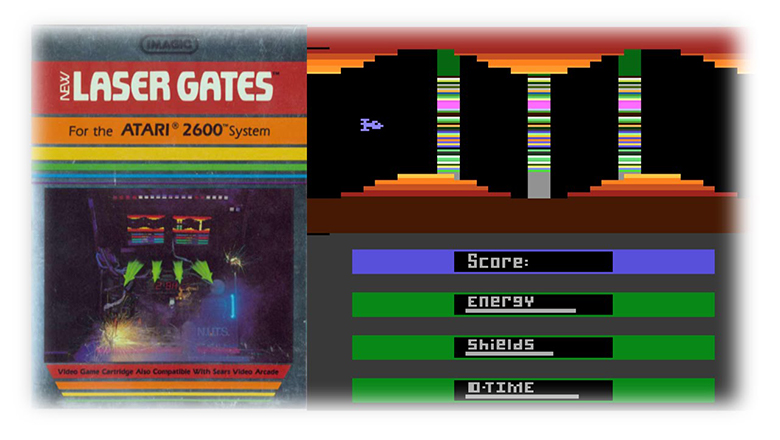 This is one of them games that doesn’t really look much, the play area is only on half the screen whilst the other half screen contains that game statistics but despite this, its a really fun and quite addictive sideways, shoot-em up scroller!

Released for the Atari 2600 by Imagic back in 1983, the game places you in control of a space ship called the ‘Dante Dart’.  Your mission is to fly you ship through the caverns to reach and destroy the Cryptic Computer which has malfunctioned.

The four Fail-safe Detonators inside the Computer have now initiated a  universal self-destruct!  This galactic defense synthesizer has maintained peace for the five centuries since the Wars on Zevon.

Your mission is to navigate you ship through the caverns whilst trying to avoid colliding with the jagged walls, you must destroy byte bats, radar mortars, rocket munchers & homing missiles along the way.

Amongst this lot, you also have to also contend with blasting you way through Dense pack columns.  These are solid walls that you will have to blast a path wide enough to fly your ship through.

There are also fixed, flexing and flashing force-fields, timing is of the essence with these.  The fixed ones you’ll have to repeatedly fire till they are destroyed, the flexing ones will have a gap which moves up and down that takes a bit of skill.  The flashing force-fields come in pairs allowing enough room in the middle of them to fit you ship in, its impossible to fly past both in one go.  Later in the game these appear in three’s.

At the end of your mission you will come across the four fail-safe detonators, you will approach each one simultaneously.  These are recognized by having the number 6507 in the middle of them.  Once all four are destroyed the game finishes.

The 6507 actually corresponds with the processor the Atari actually uses so watch out in case the old girl goes up!

During the game, its well worth while keeping an eye on the instrument panel below.  The Dante Dart consumes energy at a regular pace.  Laser fire and collisions DO NOT however affect energy reserves.  Whilst travelling along the computer passageway, you will come across energy pods, these can be used to replenish your energy reserves.

At the beginning of each game, you will start with 24 shield units. With each collision, the indicator will get shorter!  However, you can gain 6 Shield reserve units for every 10,000 points you score!

Surprisingly, the game was only ever ported to the Atari 5200.  Its not a bad version and does have a few tweaks but i prefer the 2600 version.