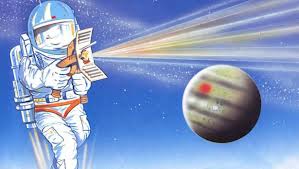 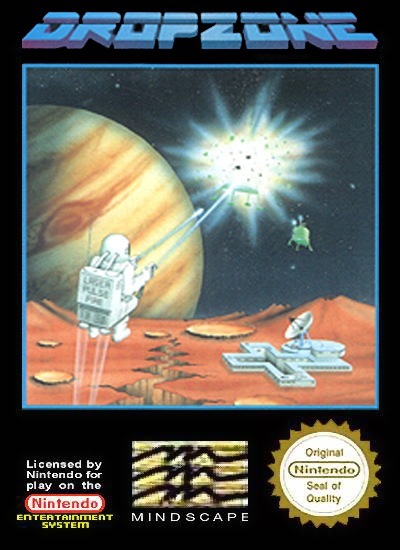 This is a game that I was introduced to many years by a good friend on his Atari 800XL.  Archer Mclean (known then as Arena Graphics) started to write a game shortly after he purchased an Atari 800 as soon as they were officially launched in the UK in 1981.

Over a number of years the game ivolved into what we now know as Dropzone.  Once it was finshed in 1984, it was then released by U.S.Gold.  Initially released for the Atari 400/800 and Commodore 64 it was later ported to the N.E.S (Nintendo Entertainment System), Game Boy, Game Gear and Game Boy Colour.

This shoot ’em up video game holds many features to the great arcade game Defender with its bi-directional, horizontally scrolling.

The game places you in the year 2085 where only a handful of people have survived after the great robot wars.  In a final desperate bid for survival, what is left of the human race have developed a starship to transport the remaining survivors from earth to a new star system to hopefully make a fresh start.

The only problem is, is that the starship requires rare Ionian crystals to power the ship on it long journey and the crystals can only be found in large quantity’s on Jupiter’s second moon Io.

The only problem now is that no longer had the moonbase been completed when the first wave of aliens from planet Jupiter arrived to rid their moon of what they see as a human invasion, this is where your mission begins.

You control a hero that has been sent to fly over Io’s surface to try to rescue the scientists and bring back the crystals.  Fortunately for you, your suit is equipt with some James Bond style gadgets such as a jetpack that is armed with a laser cannon, this is used to destroy waves of aliens that will try and prevent you from completing your task.

You also have a cloaking device that can be used for a limited time of 15 seconds before in switches off to recharge.  You also have three strata bombs at your disposal that will destroy most anything in view except androids so use them wisely.

The cast of Characters are:

At the start of each attack wave the ‘men out’ count will show haw many men/scientists are on the surface.  Whenever the alien Planters lower and android to destroy a man, he lets out a distinctive whistle that echoes.  You can rescue these by picking them up one at a time, going to the dropzone that is at the moonbase and dropping them off at the elevated landing pad for bonus points.

Planters are the most common alien you will encounter.  They are machines piloted by androids that are on the look out for the scientists.  They will drift across the surface rising up over Volcanos and the moonbase.  When you attack, the Android will lower itself to the surface to chase a man, it will leave the Planter machine to become a Nemesite.

When an Android machine has landed, the Planter will automatically turn into a Nemesite.  This is a deadly homing missile that has its sights set on you and nothing else and will avoid your pulse laser fire until they are close enough for collision.

Spores are fairly harmless until triggered off.  When this occurs they relaese four individual trailers that will come after you.

Trailers can be awkward to handle.  Some will roam around in space whilst others will aim stright for you and follow where ever you go.  They can only be destroyed by a direct hit.

These storms are silent but deadly, They slowly float in the upper atmosphere either raining molecular acid or releasing intense bursts of proton lightning.

If you stay on the same attack wave for to long, aliens will send out their ultimate weapon.  NMeye’s watch your every move only occasionally blinking.  They are fast moving and erratic, eventually dropping bombs on you making them harder to destroy.

Generally these are quite dormant shooting small magma lumps out onto the surface.  However, if all the men are lost the planet becomes unstable erupting deadly white lumps.

Planter’s, Nemesite’s, Anti-matter and Nmeye’s can shoot small bright bombs at you.  If you are moving with the same velocity these wil destroy you.

The ranks awarded to players at the end of a game are (in order):

In 1995 Archer Mclean reinvented the game for the Super Nintendo and the Playstation 1.  Called Super Dropzone the game was developed by Eurocom Entertainment Software and published by Psygnosis.  The layout of the game is  basically the same but it features more colourful graphics, speech and some superb sound effects for good measure.

All in all this is a great game when it was released and the updated version is just as playable.  This is one that should not be missed by any collector of retro video games.