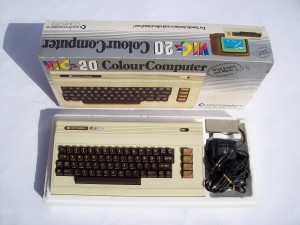 The Commodore VIC-20 started life in June 1980.  Initially it was going to be called the Micro-pet but due to the 6056 chip ‘Video Interface Chip‘ which was engineered and manufactured specifically for the Commodore VIC, the Commodore Executive, Michael Tomczyk, added the ’20’ part simply though that it sounded good.

Despite the VIC-20’s development starting in 1979, it only reached the shops in 1981 giving it a relatively short life span.  At the peak of the Commodore VIC-20’s life,  Commodore was producing 9,000 units daily and had sold over 2.5 Million units throughout.  This made the Commodore VIC-20 the first Computer the sell more than 1 million units.  With an estimated 300 titles on cartridge and over 500 titles available on tape, the system did pretty well for itself.

I find it quite amusing when I read the box as it states on the side “The Commodore VIC-20 for the Home and Business” and to think that in the US, a television commercial featuring Star Trek’s – James T Kirk (William Shatner) was made to promote the Vic-20’s sales.  Sadly, despite Commodore’s best efforts, the VIC-20 production line was to be shut down in January 1985.

The Commodore VIC-20 was sold worldwide.  German production had to change it’s name the the ‘VC-20’ as the word ‘VIC’, spoken in German translated close to the word ‘f*ck’ lol.  It also coincided with the Volkswagan Car Brand and the VolksComputer became a big hit in Europe.

The Commodore VIC-20 continues to have a loyal following today.  Programmers continue to write demo, utility, and game programs for the machine.  Here is a demo that really pushes the Vic-20’s capabilities, something that is quite amazing considering how basic this system is.

Jack Tramiel the Founder of  Commodore had stated that initialy the VIC-20 was to  only have 1K of RAM, but ended up with 5.5K of RAM 2K of which was for the Basic Operating System (3.5K WOW).  Fortunately, Commodore later released larger memory Cartridges  being 3.5K, 8K, 16K, and it was believed that other manufacturers produced 32K and 64K expansions as well. 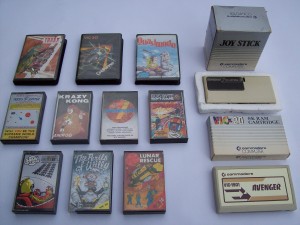 Many peripherals accompanied the Commodore VIC-20 such as the CN2 Cassette Drive, a 1530 and a 1540 Floppy Disk Drive, a CBM 1020 Docking Station, a VIC 1515 Printer and later the VIC-20 was allowed to use Pre-Internel Services like Compuserve via a Terminal Cartridge and a VIC Modem.

To me the Commodore VIC-20 was a Great computer in it’s era.  Featuring colour graphics and sound for the time was great plus fantastic games like Software Projects – The Perils Of Willy and Jeff Minters – Gridrunner & Matrix.  This was a fantastic time in the early years of gaming and these early titles simply paved the way for the Commodore 64.