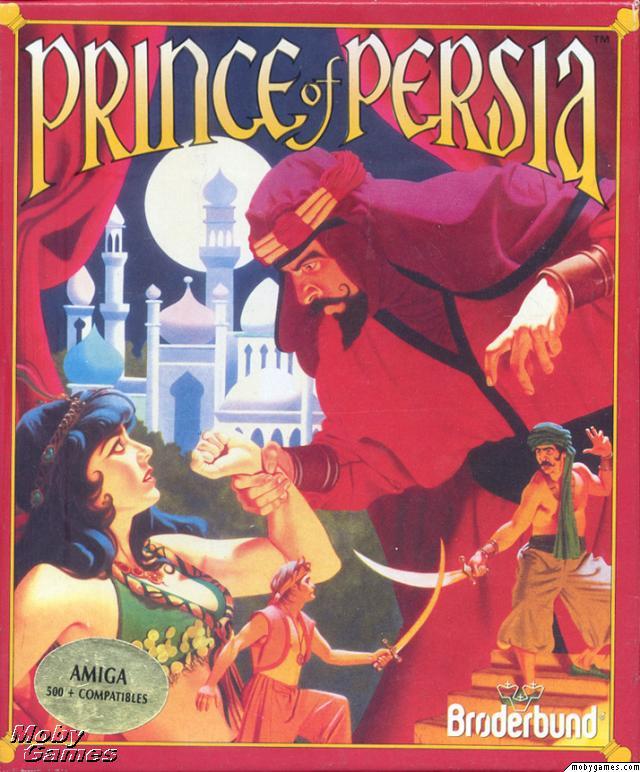 Who would have thought it?  This historic game, Prince of Persia, is 25 years old this year.  My first encounter with the game takes me back to the early nineties when I played the Commodore Amiga version and got totally hooked on it.  In some ways, it was like an early scrolling Tomb Raider.

This fantasy platform game was originally developed by Jordan Mechner and was released by a few different software companies, initally by Broderbund/Dormark, then a few years later by ‘The Hit Squad’ and currently by Ubisoft on the newer platforms like to Playstation 3.

Mechner’s career started quite by chance.  He received an Apple II computer as a present at the age of 15 and that started him off in the direction of writing games.  The only problem was that he also wanted to get involved in the film making industry, as he was also quite passionate about the flicks.

Building a career within the film industry for anyone is extremely difficult.  With his passion for gaming ever bubbling under the surface, his way forward was to continue to nurture his programming skills whilst studying at Yale University in 1984.

Mechner also held a strong fascination for animation and began to be involved with the concept of ‘rotoscoping’.  This is an animation technique that involves animators tracing over live-action film movement frame-by-frame.

To help in creating this style of human movement, he enlisted the help of his brother, Dave.  His brother would act out various movements such as running, jumping and squatting whilst Mechner captured the footage that  he could later cut into the scenes for use in his next gaming project.  By merging the two together,  he had created his first masterpiece, Karatica.

Most of this animation came from his love of the  ‘Indiana Jones’ films, especially ‘Raider of the Lost Ark’.

To think,  that after he had completed Karatica on the Apple II,  he considered abandoning gaming altogether in order to follow his  heart as a filmaker, the path which he initially started out on!

What happened over the next 20 years or so just goes to show what you can achieve with the willpower to succeed.

Karatica had now sparked something within Mechner.  With so much enjoyment from writing his first game, featuring the revolutionary movement within his character, smooth scrolling and fast paced cut scenes he then wanted to take his ideas further.

He wanted to take what he had learned and combine it with some kind of puzzle-solving, similar to what was in the current games that Mechner had been playing –   games like Roadrunner and The Castles of Dr Creep.

He did this very successfully and the end product was ‘The Prince of Persia’.

It is set in ancient Persia where the Sultan is at war with his vizier, Jaffar, a wizard.  Jaffar is trying to seize power in an attempt to take the Throne for himself.  His only obstacle is the Sultan’s daughter whom he locks in the tower, with the intention of making her his wife.

The game’s nameless protagonist, whom the Princess loves, has been thrown into the palace dungeons by the wizard.

Your task is to lead him out of the dungeons and up toward the palace tower, defeating Jaffar and freeing the Princess in under 60 minutes (120 minutes in the Super Nintendo version).

On starting the game, you willl notice that your health indicator is represented by three small red triangles.  You will lose one of these indicators each time you are injured, either by being cut by a sword, hit by a rock or falling over two floors.  Your health can be replenished by collecting the small red jars that are scattered thoughout the game.  Each jar will restore one health indicator.

If you lose all three health indicators, you will die and the game will start from the beginning of the level that you were last on.  There is no limit to how many times you may die, but remember that each time you do, time is wasted and the key to the game is you time limit.

During the game, there will be three different types traps that you must bypass.  Spike traps are deep pits (three or more levels deep) and guillotines.  Falling or getting caught in one of these will result in instant death!

You will come across gates that need to be raised to continue, these can be activated by standing or running over pressure plates in the floor, but remember that some of these plates may be locking triggers.

Jaffar, the wizard, has swordsmen scattered throughout the palace that you will need to overcome.  You will find a sword on the first stage that will aid you.  You can use the sword to advance, back off, slash or parry with this.  Enemy swordsmen also have a health indicator similar to yours. Killing them involves slashing them until their health indicator is depleted or by pushing them into traps while fighting.

You will encounter quite a unique trap in stage four, a magic mirror.  The trap serves as a plot device, whose appearance is followed by an ominous musical tone.  You are forced to jump through this mirror  and his doppelganger emerges from the other side.

This apparition will  hinder you and later throw you  into a dungeon.  You cannot kill this apparition as it shares your lives; any damage inflicted to him will also be inflicted on you.  Therefore, you must merge with your doppelganger.

Several Prince of Persia games have been made over the years, they are:

Although it wasn’t thought possible, Prince of Persia has been converted to the Commodore 64 by Andreas Varga (aka Mr. SID) and published on 16 October 2011.

This superb conversion version on the 64 continues to amaze gamers even today.  Just as its forerunner, the game speed is high and the controls are precise and easy to learn.

The animated characters are slightly more pixellated, but are still very smooth due to good animation,  similar to that on Summer Games or Impossible Mission.  The graphics get a 3D -view due to its type of display.  The  “stuttering”, that appeared very occasionally on the C64, was reduced further on the C128 by using the 2,04 MHz storage cycle.

The sounds created by the sid chip are without exception.  They include the sounds related to movement, opening and closing of gratings, fighting and activation of traps.  These sounds are an integral to the game’s well known tension and excitement, and still hold that spark of originality today.

Also, there are animated intermediate sequences underlined with music, that continue the story.  These relieve the stress of the game and reduce the tension that has been built during playing.

A manual has also been integrated into the game that can be chosen at the beginning by a menu.  The score can also be saved from level 3 on the EasyFlash cartridge so the game does not have to be started from the beginning which is also a nice feature.

I wonder if anyone will ever try to go one step further and feature it on the Commodore Vic 20.

The movement of the prince is normally very fast. In some situations it is necessary to act slower. This was made possible by pressing the fire button at the same time as the movement keys. Furthermore,  one can pick up items or drink from them, hold onto ridges and let oneself fall down slower with the fire button.

Search everything on the screen. There are also loose boards which you can make fall down by jumping around.Furthermore there are switching boards to open and close gratings and doors.

In some situations,  you have to slip quickly through the iron gates. Try this also with narrow passages!

At the start of the game you have 3 power points. You lose one point by falling too deep (2 storeys), by boards that fall on you and by a hit in a fight.

Traps and also some fighters get only active when you get close to them!

Traps or also guards (outside the fighting mode), as well as falls over 3 storeys can kill you directly. If you die within the real playing time, you restart the current level anew.

But you need to press the fire button within 20 seconds after the death to repeat the current level, or else the game is ended and you go back to the title screen.