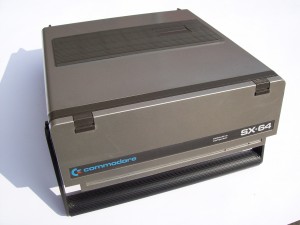 The Commodore SX-64 portable, often known as ‘The Executive 64‘ was released in 1984.  This was a briefcase/suitcase size portable version of the infamous Commodore 64 and holds the distinction of being the worlds first full-colour portable computer and was priced at $995.

The SX-64 featured a five inch built in colour monitor and a built in 1541 floppy disk drive.  These machines were also very well built, the SX-64 had a rigid metal casing, and a sturdy handle which doubled up as an adjustable stand. With the unit weighing in at 23lbs (10.5kg) your really needed to be built like Arnie to carry this computer any real distance lol.

Only subtle changes were made from that of the ordinary Commodore 64.  Blue text on a white b 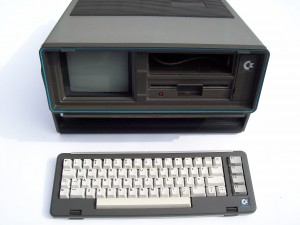 ackground enabled easier reading due to the small screen. Also, due the disk drive and a small screen there was no cassette or RF port on the back of the unit aswell.  What i like about the SX-64 is when the ‘Shift/Runstop’ buttons are depressed, this process automatically boots the disk were as on the Commodore 64  it would say (press play on tape) to load a program or game.  Also due to the size of the monitor, games look to be at a higher resolution due the graphics on the screen being so compact  Great. . .

An enhanced version of the SX-64 was later made called the DX-64.  This had two disk drives as apposed to just the one in the SX-64. Only a hand full of these are believed to exist and are extremely rare.  It has been known for some collectors to install a second disk drive into the empty drive slot to resemble a DX-64 but i prefer to keep these rare machines in their original state.

Another version of the SX-6 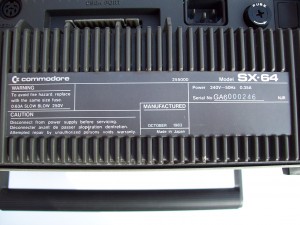 4 was also announced called the SX-100.  This model was to have  a monochrome screen but unfortunately it was never released.

It is believed that unlike the Commodore 64 which sold over 20 million units unfortunately the SX-64’s sales never passed 9000 units.

My SX-64 has a special place in my collection and even more so with it being in mint condition and having a low serial number of only  No-246.

Same as the Commodore 64, except the following:

Here is the advertising commercial of the Commodore SX-64 that was made in Australia and Bloody Hell Bruce it a real stinker.  I think Bruce had been drinking a bit to much of the old  XXXX  before creating this lol. . .