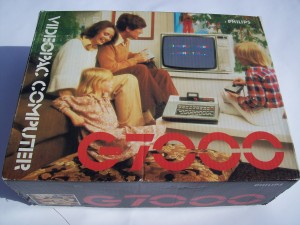 This is were my  gaming passion really started, the ‘Philips G7000 Videopac Computer’ being my first ever computer console.  At the time I desperately wanted an Atari 2600 as it was the console to have at the time but I was absolutely bouncing when I recieved my Philips G7000 on Christmas Day.

It all started with Magnavox (being the Latin for ‘Great Voice’) creating the Odyssey 2.  A second generation console developed by Philips’ Odyssey division subsequent to its purchase of Magnavox in 1974.  Other versions such as the philips G7200 and the philips G7400 arrived later. 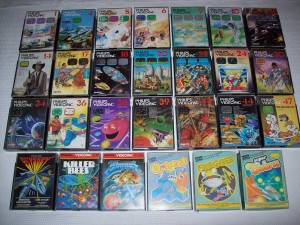 F.  In USA  was known as the Magnavox Odyssey 2 (or Odyssey 2)  and in 1983 the Brazilian branch of Philips released it as the ‘Odyssey’ where it became more popular than it ever did in the USA; Tournaments were even held for popular games like “Videopac 44′  –   ‘KC’s Crazy Chase’.  Television commercials for most of the videopacs games were made such as this Freedom fighters clip.

It was called a ‘Videopac Computer’ as the cartridges were known as  ‘Videopacs’ although in France they were called  ‘Jolpacs’ and as a ‘Computer’ as it had a fully Aplhanumerical Membraine Keyboard which no other console had at the time. The console used a 8048 intel processor and had 2kb of Ram, 4kb of Rom, although the cartridges only used 2k Roms.

The console sold very well as by 1983 the Philips G7000 had sold over 1 Million units just in the US alone.  Ron Bradford and Steve Lehner were the brains responsible for the games, graphics and the packaging.  Over the systems lifespan over 70 cartridges were produced for it.  There was a wide range of well known games that were similar to that of the atari like Munchkin which was like Pac-man, Space Monster which was like Space Invaders, Freedom Fighters which was like Defender and Satallite Attack which was basically Asteroids.

Well known companies  like Imagic and Parker Bros also jumped on board with Imagic releasing versions of the well known Atari  2600 games Demon Attack and Atlantis and Parker Bros releasing versions of Frogger, Spiderman, Tutenkham, Super Cobra, Popeye and Q-Bert,  some of these titles are very rare such as videopac 65, Spiderman.  Only 65 of these videopacs were made and 50 of them had a rare box cover and an ever rarer title was Mission Impossible were only 30 cartridges were made by  Humanoid Games. 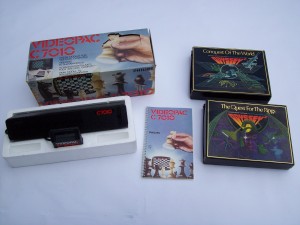 The kind of gaming that impressed me, not forgetting that these were made in the late 70’s were the large boxed interactive games.  Such titles as Conquest of the World, The Great Wall Street Fortune Hunt, and my personal favorite that was a fantastic version of  JRR Tolkiens – Lord of the Rings which on the videopac was called Quest for the Rings.  I suppose it could also be comapired to Dungeons and Dragons.

Basically these titles were computer interactive board games.  They came in a large cardboard box and inside would be a keyboard overlay, plastic tokens and characters that could be moved around a board that gave you the interactive element for that in-depth quality,  Fantastic. . .  For the time in which these game were produced, the videopac now seemed quite and advanced system.

There was also a few add-on’s later made available for the G7000.  The C7010 was a chess module that sat on top of the Philips G7000 with a lead from the module going into the Videopac.  The module was created purely because the G7000 did not have enough memory to run a decent chess game so a secondary CPU and memory were installed on the C7010 module to over come the problem.  There was also a Home Computer Module C7420 that was Microsoft based.  This had 16K of ram and let the user create very basic programming.  The best of the modules was called ‘The Voice’,  this was a basic speech synthesizer and also enabled much better music and enhanced sound effects to be produced 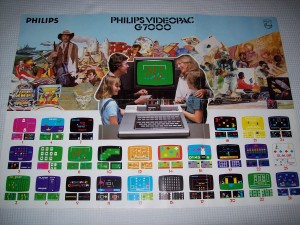 Here Is a list of  ‘Videopacs’
Videopac A:  Newscaster